All my life I’ve saved stuff and reused it. 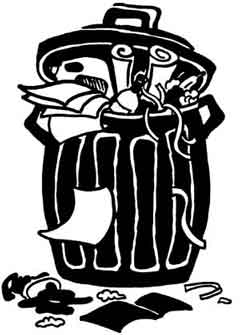 From cars all the way down to rubber bands. I’ve owned numerous cars but only one of them was purchased new. All the rest were second hand, recycled from someone else’s life. I still pull the rubber bands off the throwaway newspapers that land in my front yard and put them on the doorknob. When it gets hot and there are a lot of rubber bands on the doorknob, the rubber bands kind of half-melt and get sticky. They gunk up the doorknob so when you go to open the door you think you’ve just grabbed a handful of something awful, which, in fact, you have. But I figure, why buy rubber bands when people deliver them free to your front yard? I’ve never been without a rubber band when I needed one. Not ever.

When I was a young man I bought second hand clothes at thrift stores. I saved money doing that, and I developed my Who cares what you think of my fashion sense attitude, which has served me well. Instead of trying to be stylish I just wear what I want. It gives me a sense of freedom, not having to figure out what’s hip. Of course, there was a time in the sixties when it was hip to wear old clothes, so for a little while there I was cool. But I’ve been around long enough to know that fashion just goes around in circles anyway, and if you keep something in your closet long enough it’ll come back in style.

I do keep things in my closet. A lot of it should be discarded, but I’ve become sentimentally attached to it. I keep things so long that they can’t even be donated to thrift stores, because they’re too shabby. But when I’m walking out to the trash can in the alley, a bag of trashy old clothes in hand, I think I can hear them sobbing, begging for a reprieve, desperate to avoid the landfill. Half the time I turn around and bring them back in the house. This is a sickness, I know. I need help. Somebody help me.

I also need help with old computers, and old computer parts. I started tearing apart and building PC’s 20 years ago. I’d upgrade some component, say, the video card, and then I’d end up with a spare video card, perfectly usable, just not by me. I’d try to find someone who needed one, and failing that I’d put the thing in a box, alongside the 300 baud modem. You never can tell when stuff like that will come in handy. Over the years my box filled up with ever more sophisticated components. At some point I started buying new components that I didn’t need, and putting them in the box. Now I have maybe ten boxes of this stuff. I discovered the rule that you have to get rid of old computer stuff within six months of decommissioning, or else it is hopelessly obsolete. I have suffered the humiliation of being turned down when I was trying to give away perfectly good, working computers, because they were obsolete. But these things contain toxic components. You can’t just put them in the landfills, with all their mercury and lead and battery acid, and who hasn’t seen the 60 Minutes expose about that village in China where all the “recycled” computers go, to be dismantled and sold by the pound by naive villagers who have no other means to support themselves and do the work with no hazmat protection? Best just keep the stuff in the garage.

For decades I have lined my kitchen trash can with plastic grocery bags. It seems proper: You go to the store and get food, carry it home in a plastic bag, open the cans or bags or boxes, prepare meals, then toss out the excess in the same bag you used to bring it into the house. Some people buy trash bags to line their kitchen trash cans. Presumably, they put their grocery store bags into the bags they bought, and throw them away. Why would you do that? Of course, over the years the quality of the free bags at grocery stores has declined. Recently they have been little more than a film of translucent plastic, nothing like the sturdy, built-to-last paper bag replacements they were originally. I had to adjust to these flimsy pieces of crap, but with care I was able to make them work as trash bags.

But now everybody’s all green and the stores are saying they don’t want to use any plastic bags at all anymore. This started with the health food stores first, then spread to places like Trader Joe’s, who actually would prefer if you brought your own bags with you. Then health food supermarkets, like Wild Oats and Whole Foods picked up the idea, and now the regular supermarkets are in on it, too. At first it was kind of like “paper or plastic?” But the evolution has gone rapidly all the way to “we don’t have any bags at all, sucker.” I guess I could get some of these biodegradable trash bags made out of starch, but I kind of like the old groceries in – garbage out symmetry.

Growing up I remember there was always something like a milk carton near the kitchen sink, or an old coffee can, where we put wet garbage. We didn’t always have a garbage disposal, and even if we did, there are some things you can’t put in there, but if you put those things in the paper-lined garbage can in the kitchen, you’d have a slimy mess on the floor as soon as you lifted that bag to take it out. So, as my plastic bag supply dwindled dangerously low, I got a coffee can (from my saved collection in the garage, natch) and put it next to the sink. To make it more or less reusable, I lined it with a small plastic produce bag — they’re still giving those out at markets. Now we put little stuff in the garbage disposal, dry trash in the trash can, and icky wet other stuff in the coffee can, and I take out the kitchen trash every two or three days instead of every day, to save on plastic bags.

This is a big pain in the butt. I’m probably going to start buying trash bags, brand new. It’s wrong, but what else can I do?

6 Replies to “The Garbage Dilemma”