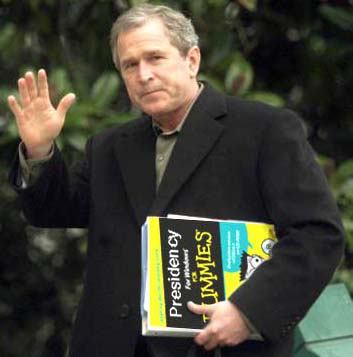 I got hold of an early copy of President Bush’s second inaugural address back in 2004, and I published it on this blog. Unfortunately, his handlers changed the whole speech at the last minute, and the draft I had wasn’t used at all. These damned neocons are just too smart for me, so I’ve stopped trying to scoop them.

Instead, here’s what I think is going to happen in tonight’s State of the Union address.

The last year in office is the time when most presidents try to firm up their legacy. No matter what they’ve done in office, no matter what has happened in the nation and the world on their watch, they use their last months in office to make it look as if they were Great Statesmen, so history will remember them fondly, and their portraits can be on the White House walls proudly displayed next to George Washington and Abraham Lincoln.

Of course George W. Bush is too arrogant and clueless to realize that his image needs some polishing. He thinks he’s done a great job. Heck, he’s even named a Doctrine after himself: the Bush Doctrine, which states that the United States has the right to do anything it wants anywhere in the world — including invading countries who do not threaten us — no matter what anyone thinks, as long as the president says it’s OK. Way to go, Mr. President!

But he does have one last task to accomplish in order to ensure that the right wing spin machine installs him as The Greatest President of the 21st Century alongside Ronald Reagan, The Greatest President of the 20 Century, and that’s what he will be doing tonight during the SOTU address: He must now try to create an environment in which the Republican Party can win some elections in 2008, especially the Presidential Election this November.

It doesn’t look good. There’s the illegal war he’s losing in Iraq; the failure of his government to respond to the horror of Hurricane Katrina; the collapse of the unregulated subprime mortgage industry, which will take the homes of several million people before it’s finished; the near-tripling of oil prices; the mass exodus of decent American jobs to the third world; the parade of corrupt and criminal Republican officials; the looting of the Treasury; the degradation of the U.S. and world environment; the unilateral abrogation of international treaties and the systematic theft of American civil liberties. A lot of folks are pretty pissed off about some or all of these, and even a lot of Republican voters are thinking that a change is necessary.

So get your air sickness bags ready. Here’s what he’ll say tonight.

Those will be the highlights, and if we buy that, maybe the neocons and Republican candidates will not be utterly and completely discredited and humiliated in the coming months. He’ll just have to hope, I guess, but I don’t think it will work, do you? There will be more, naturally, but it will be right-wing parallel-universe patriotic fantasy filler, just to pad things out so it doesn’t look as if he wants to get the hell off the dais before the tomatoes start to fly.

Tune in with me to this Very Special TV Event tonight at nine eastern, won’t you?

PS: And just in case a Democrat somehow manages to fool the public and get into the White House this year, won’t that Democrat be surprised to learn that the Bush Defense Department has reduced it’s funding request for the war in Iraq so that it will run out in January, 2009! So if the new President wants to fund the troops for even one more day, (s)he’ll have to ask for more money, proving that the war really is the Right Thing to do. As I said. these neocons are just too smart for me.

2 Replies to “The Legacy”