The Democratic candidates for President have been forced out of the race roughly in the inverse to how good they would have been at the job and how different from the mainstream were their messages. 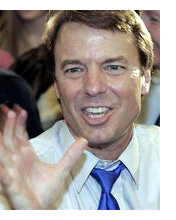 Richardson, Dodd, Biden and Kucinich represented a combination of experience, competence and new ideas. Any of them would have been a good president, maybe a great one, and certainly in that mix one could find ideas and programs that diverged far from the business-as-usual that Americans have had to accept in recent decades. So the corporate media ignored them or made fun of them, and we failed to support them, and they are gone.

Now John Edwards is leaving the race. His underfunded, under-publicized campaign truly forced the leaders at least to give lip service to his progressive ideas. There was a moment when poverty mattered to the big campaigns, when universal health care had to be talked about, when withdrawal of troops from Iraq was a viable notion. John Edwards sustained that moment until this morning, but it’s over now.

I hope Hillary Clinton and Barack Obama remember the moment. I hope Edwards’ campaign continues to affect the direction of the nation. But I don’t hope much. Mostly, I now resign myself to another presidential election in which I pick the Democrat over the Republican, because those are my only choices and because I know the Right is not my direction. I’m a little disappointed.

Smarter people than I will analyze the Edwards’ campaign for the next 12 hours or so, before it passes into political insignificance. You can get the pundit scoop from MSNBC or wherever. As for me, I’m left wondering who on the national stage speaks now for the poor, the hungry, the sick, the oppressed and the homeless.

PS: The latest Rasmussen Poll (today, January 30) shows that in a national election, John McCain would beat Hillary Clinton by eight percentage points, 48% to 40%. McCain comes out ahead of Barack Obama by six points, 47% to 41%. Meanwhile, throughout the past year Edwards led all Republican candidates by greater margins than either of the two “top tier” Democrats. So, one less problem for the Republicans to worry about, eh?

UPDATE, 5:00 pm: Ralph Nader is thinking of running for president. That should seal the coffin.