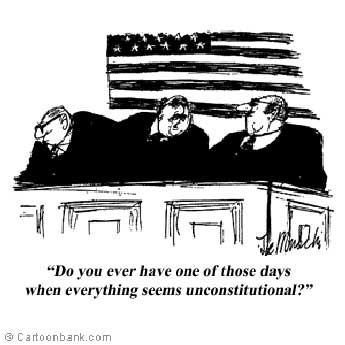 …who didn’t bother to vote in the last two presidential elections, or who think there is “no difference between the two parties,” or who voted for George W. Bush: How do you like the new Supreme Court? You know, the one with the two right-wing judges appointed by George W. Bush. We’ll all have to get used to it, because they’ll be with us until they die, which should be at least until your young children are middle-aged.

Let’s hope the kids don’t step out of line and try to use any of that crazy Free Speech stuff, because the Roberts Court doesn’t care much for that. That kid in Alaska with the “Bong Hits For Jesus” banner just found out that he doesn’t have the right to say what he wants, even if it’s just a meaningless slogan that harms no one. Remenber when speech was protected? Those days are over, folks, thanks to the current Rove/Cheney/Bush Administration.

No doubt the kids will also be pleased to pay their taxes to support other peoples’ churches, too. The Roberts Court thinks this is a good idea, so they’ve decided to allow it, and take away your standing even to argue about it in court.

To make sure that no one gets the wrong idea about “the facts” at election time, the Supremes have also struck down that portion of the McCain-Feingold campaign finance law that says rich corporations and powerful unions can’t buy phony “issue ads” just before an election. These ads are thinly-disguised campaign attack ads, designed to circumvent legal restrictions on campaign spending by entities who have more money than God and an agenda not necessarily in the public interest. Look for a lot of ’em in 2008 and beyond.

These decisions were all handed down on the same day this week, leaving behind a somewhat scarred constitutional landscape. I know you thought you were voting against homosexual marriage, and for the right of every embryo to 40 acres and a mule, and against those crazy tree-hugging flip-floppers Gore and Kerry. And that’s what you got, along with a little abridgment of your rights, and a little more appropriation of your money. I know only zonked-out left-wing moonbats talk about “rights” as if it is some kind of sacrosanct concept, so maybe only the moonbats will agree with me. That’ll just be my cross to bear.

I’m sure the rest of you won’t mind living with these types of decisions for the next 30 or forty years. After all, both parties are about the same, right?

(Suggested reading for those who wonder what set me off: This short NY Times editorial.)