This is where I’ve been spending all my time lately: 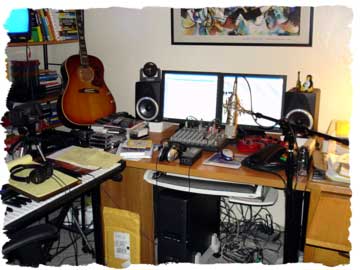 I’m getting too stupid to remember for sure, but I think I have mentioned that in the 21st century, even the cheesiest dives in my home town demand an “audition CD” before they will talk to you about booking your band. I mean, these are places I would never go as a customer. When we started our little garage band I thought it would be easy to talk my way into a gig at one of these toilets, but I guess everybody’s so hip and advanced now that they think they can make musicians jump through hoops. As if that has changed since the 80’s.

We call our band Big Noise. Last weekend we went to a 24-track studio in Orange County and recorded the basic tracks on 10 cover songs. Actually, it was nine covers and one that I wrote, but the one I wrote sounds so much like a cover that nobody even noticed. Basic tracks were two guitars, bass and drums. However, by opening two vocal mics and putting every drum on it’s own track the engineer managed to fill up all 24 tracks.

All I cared about was the drums, because I can’t record them at home. Too many mics, too much noise. Now that I have the tracks I am transferring them to my home recording computer, where I will re-record most of the guitars and some of the singing, then mix it down into a guaranteed, sure-fire, audition-passing CD. This is, by the way, the recording computer that broke down while I was doing this post, forcing me to put up an unfinished version of what I was trying to do. With the recording date looming and the boys in the band counting on me (and threatening me, in their quaint way), I had to put it back together.

With the machine rebuilt and the tracks in hand, I have had no choice but to spend every free moment in this cramped, poorly-ventilated room, staring at the timeline scrolling past on the screen like the last hours of my life, pinching my ears by wearing glasses and headphones at the same time, fighting exhaustion, figuring out guitar and harmony parts until my fingers and throat are raw, trying to make Ross’s old tubs sound crisp and modern and facing, again and again, that I am neither the singer nor the guitarist that I want to be.

[Oh yeah: Today is the first day of summer, so off with the clothes, everybody!]

7 Replies to “Recording the Noise”