It has occurred to me… 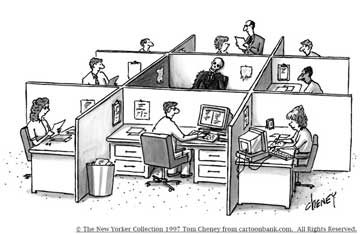 that one of the big differences between working in a mom and pop setting and working for a huge corporation is that your boss in a huge corporation is really sort of a “compliance manager.” His main gig is to satisfy the requirements of the corporation, immutable edicts often handed down by faceless officers in another city whom he will never meet. They say what they want. He has to get it done for them.

Thus, he turns to his people, whoever works for him, and, if he’s good, makes them do whatever the hell the corporation thinks it wants that month. He will be held accountable if the job isn’t done. Knowing that, he can’t waste any time or pleasantries in handing out the chores. Explaining things would take too long, and failure will bring harsh consequences – for him. His fear is transmitted to the staff, who don’t know exactly what’s going on or why. They grow restive and crabby.

The owner or manager in a small operation must take care of his workers, because they are the ones who take care of him. He sees them as coworkers, and they really are. The orders don’t come in emails or bulletins from a distant land. They usually come from down the hall, or the next cubicle. There is a chance to discuss how a program should be implemented, if it should be modified or even if it should be dumped altogether. The people who must carry out the orders are actually involved in the reasoning behind them, or at the very least they are there to observe first hand their genesis. The workers have a sense of being at least a little bit in control, so, to the extent one can feel good about trading their precious time for money, they feel good.

My office has a new manager, one sent from The Corporation to replace the one who retired. The retiree had fifty years of experience in the industry and had done every job. She was efficient but not brutally so, and she cared for her workers like a stern but loving great aunt. The new guy is in his thirties, with The Corporation for 18 months, an advanced degree in accounting. He takes literally the orders from headquarters, does not not understand passive resistance, thinks everybody who works for him has equal abilities and aptitudes and so anybody should be able to handle any task handed them. In his effort to comply with corporate mandates he has made abrupt changes, giving only cursory explanations or none at all. They are turning out balance sheets and reports as required, and morale has never been worse.

Virtually everyone is looking for a new job somewhere else.

Most of this affects me only peripherally, since for some time I have been gradually reducing the amount of actual work I do around there, and at this point I am down to about thirty-five minutes per hour. Plus, I have been there longer than all the bosses, and all of them think I work for someone else. So I can stay under the radar pretty much. although I know The Corporation will find me eventually, and fire me or give me something to do and, God forbid, someone to report to.

In the meantime, I am watching the show with some alarm. The Corporation has no clue how to manage people or what to do to correct course when things aren’t going well. This disruption in the office, caused by them, is likely to be dealt with through some ham-handed management school method, which, taken to it’s extreme, could spell the end of my job.