My name is Larry, and I am a cilantroholic. 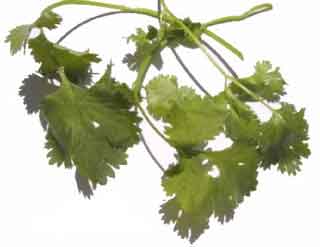 My story is probably not that much different from yours. I had my first taste of cilantro at a Thai restaurant in Hollywood. I went there with a friend who wanted me to try the Tom Ka Gai – spicy soup made from coconut milk, with chicken, lemon grass and “thai bird” chiles. He thought it would be hot enough to burn off the top of my head, and it was, but this particular Thai restaurant had a secret ingredient, and as I ate my soup, the cilantro spoke to me.

I didn’t know what it was that first time, but the exotic flavor intoxicated me. With each sip I fell more in love, and I determined right then that I had to have more. I asked the server what was that unusual flavor, but the language barrier was insurmountable that day. Frustrated, I had to leave the restaurant unenlightened. For weeks I tried to discover the magic ingredient, asking everyone I knew who cooked.

I went to the spice section in grocery stores and lingered there, reading labels. If I couldn’t identify the spice from the label, I bought it and took it home to test (damn those tamper-proof caps). It seems foolish now, but I didn’t know what form it came in – what else could I do?

Then one day at a California Cuisine/Southwestern-Style/Mexican Restaurant/Grill in Laguna Beach, there it was again. This time it was in a salad, so when that special flavor zapped my taste buds I was able to pick through the greenery until I found the source. I held it up to the waiter and demanded to know what it was.

“It is cilantro, senor. Mexican parsley.”

Never mind that it’s Chinese parsley. The important thing was that now I knew what it was, and I could go out on my own and score some of it.

At first I used it sparingly. I chopped it up finely and sprinkled it daintily on salads. I put a little in burritos, a dash of it in soups. As my tolerance grew, I began to chop it not so finely, and use more and more of it. When dining out I pored over menus, looking for dishes that might contain cilantro. If I ordered something that I thought was going to have some in it, I’d get belligerent if it didn’t. I embarrassed my friends, making ugly scenes in bistros all over town.

If I didn’t have my cilantro for a couple of days, I became moody and unpredictable. When I was out of my supply I’d visit friends and ask if they wanted to do a few leaves, hoping they’d break out their stash. More often than not, if they did, I’d finish it off before I left. Gradually, the invitations stopped.

I started to hide cilantro in different places – the storeroom at work, in the trunk of the car, on a high shelf out in the garage – so I could sneak away and have some on the sly, and not have to share.

My work began to suffer. At lunch, I’d drive half way across town to go to the original Thai restaurant where I’d first tasted my sweet, sweet cilantro, and end up taking a three-hour lunch break. I couldn’t keep a girlfriend, because no one wanted to be around that much cilantro. To hell with ’em.

Eventually I dropped all pretense of sophistication. I’d go to the Farmer’s Market and buy nothing but cilantro, big bags of it, fresh, pungent and inviting. Sometimes I wouldn’t even wait to get home and wash it – I’d just grab handfuls of it and stuff it in my mouth as I was driving. Dangerous? Sure, but I didn’t care. I would consume it so fast I’d barely taste it, and yet I only wanted more. I wasn’t getting the same kick I used to, no matter how much I ate.

I told myself that I wasn’t one of those – an addict – that I could quit any time. And I did. I quit many times. Once I white-knuckled it for two months, the worst 60 days of my life. I know now that I can’t do it alone. I’m powerless against cilantro. Some people can have it once in a while, enjoy it and get on with their lives. But my kind – we think “If a little is good, a whole bunch will be better.”

I was clean for almost a year, until tonight. Tonight I made myself a pita wrap. I browned some ground beef, grated some cheese, and then I remembered I’d eaten the last pita for lunch. I headed out to the grocery store, and that’s the last thing I recall.

When I woke up on the kitchen floor, the pita was there, and the cheese and the meat. Tell-tale leaves were plastered around my mouth. The only sign of the cilantro I must have bought before I blacked out was a few stems and an extra-large plastic bag. My breath reeked of cilantro.

My name is Larry, and I’m still a cilantroholic.