It’s the last of my five-day minivacation. 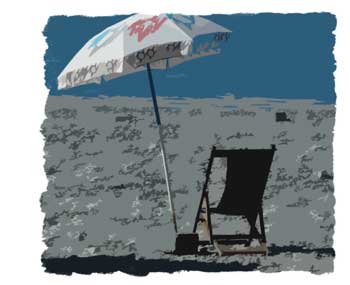 I had a day off work on Independence Day, and I took a couple of vacation days after that, Thursday and Friday, so I got myself a looong weekend. Five days for the price of two. I can’t pass up a bargain like that.

All I have done, really, is work on the recording project. Ten songs, covers, unusual choices, I hope. This is so I can put my garage band to work. At this point I no longer know why I want to do this. It’s just what you do. I mean, is it really a “band” if it doesn’t go out and play for people?

My instinct is to pick up the guitar and play it, to hear the notes and the harmonies, to feel the strings under my fingers, the body against my chest, to imagine the possible meanings. (It’s pathetic, really, how hard I try, and how little I produce.) But if you just do it alone, if you never show it, is it real? I don’t know.

Anyway I’ve decided that I have to make this CD, a digital audition, so the owners of bars and nightclubs, and maybe some booking agents, can be assured that the band is competent. They won’t have to bring us in for a real audition (although they still might demand one), so there’s no chance they can make a mistake.

What I have been doing, mostly all by myself in my home studio, is replacing most of the guitars from the original recording session, and all of the vocals. The tracks were recorded in a small room with no isolation between the instruments. Every open microphone became a drum track. Here’s what the floor tom sounds like from 30 feet away, with the mic six inches from the floor and pointed away from the the drum. Or how about that snare, mic’d from three different, apparently random, locations around the room?

This is nobody’s fault, of course. To save money, I set it up as a rehearsal recording. We were supposed to get a live mix of the session. One CD, nothing more, just to get an idea of how we were doing. For fifty bucks more I got the guy to give me the individual tracks, so I could shine it up at home and actually use it for something. Three vocal tracks, two guitar tracks, one bass and thirteen tracks of drums, on ten songs. That was three weeks ago.

Now I’m finished. Well, almost. I have resung all my parts and all the bass player’s parts, and got my brother to redo his parts. I have replaced almost all of the guitar tracks — some of the rhythm guitar tracks my brother played on his ancient Rickenbacker were too good to fuck with — and I have massaged the drums with EQ, echo, noise gates and automated mixing. I even had to move a couple of misplaced snare hits, and replace a couple that, for some reason, weren’t there at all.

It took more than two weeks to do this on the first five songs, and then — on my mini-vacation — just three and a half days to do the other five, which goes to prove what an impediment to progress my crummy job is. Along the way I felt pretty good about the whole thing. I mean, I have no illusions about this band. It’s a garage band. We should play cheap neighborhood dives and Pigma Sty fraternity parties. These kinds of gigs are exactly where I started out. Without changing much of anything, I have become a Classic Rocker.

But while I was working on the CD I wasn’t thinking of any of that. I was thinking about notes, mood, balance, placement, texture — as if it were any band great or small. Technically speaking, I did the best I could with what I had.

But I know no one will listen to a CD of ten cover songs by a garage band, and so the work is not quite finished. Now I have to cut those songs up into bite-sized pieces and string them together into one five-minute segment that will not allow you to turn it off, a demo so compelling that we will never be able to live up to the expectations it engenders. Given the attention span of most of us in this day of fast television cuts and instant gratification, I should try to cut it down to about 60 seconds, but the idea of ten-second songbites offends even me, so I’ll just go with the feel of each song, cut out the fluff and keep it under ten minutes for the whole thing.

Anybody could pay attention for ten minutes, right?

But before I do this…

After tonight this project will be over. Oh, there may be some whining from the band about the way I put it all together, and I’ll either have to spend some time beating back their criticisms, or spend some time making changes to mollify them, but in my mind I’m done. The next phase is what you’d call marketing, and I mean face-to-face retail selling the product, something I have little heart for.

That’s a step toward putting this group on stage. We’ll never make enough money to pay ourselves back for our time, effort and investment so far, but, you know: It’s what you do. I just don’t know why.

The bandstand used to be my refuge, the safe place where I could act any way I wanted, and nobody knew I was really shy, and I could be there at the dances and the parties and the clubs and the concerts in the park with all the people, and no one could question my legitimate reason for being there. Foolish thinking, I suppose, but it made me want to be there. It made me need to perform.

This time around it feels like I’ve gotten on a train without looking at the schedule to see where it was heading, and my stop is coming up, an unknown destination, and I don’t know where it is and I haven’t packed even a toothbrush.

9 Replies to “Workin’ the Noise”