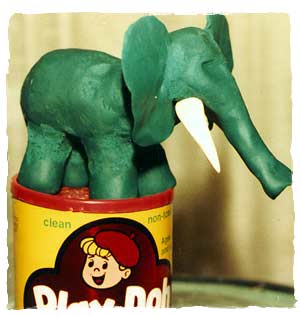 I convinced myself at an early age that I had no artistic ability. I don’t remember doing this, but somehow it must have happened, because there exists no evidence of me ever trying anything creative as a child. I didn’t fingerpaint on the walls or go out in outlandish costumes on Halloween. I choked in the sixth-grade Christmas pageant. I was Joseph, and I screwed up my lines.

Maybe it was an incident in first grade that closed the book on my creative efforts. We were “working with clay” one day. The teacher handed out lumps of brown clay. Everybody got a lump, and we all messed around with our lumps for a while. The teacher was going around the room, making sure everybody had a lump, and, it seemed to me, making sure that we were all comfortable and enjoying ourselves with our lumps of clay. After a tough hour of “See Dick run” I was ready for a little R&R, even though reading came naturally to me.

So I was bashing my lump of clay around on my desk, or maybe we were sitting at a table, I can’t recall, rolling it into a ball, flattening it, shaping it into a cube, when the teacher finally got everyone settled and went back to the front of the classroom and made the announcement that she wanted each of us to make an animal with our clay.

I was stricken with horror. An animal? I couldn’t make an animal. How do you make an animal? I had no clue. I stared at my pancake of clay in front of me on the desk, trying to think what to do first, my stomach in a knot and my heart sinking fast. I tried to complain about the assignment, tried to explain that this was just too difficult, that there was no way, but the teacher smiled in that bitchy, patronizing way they have and told me to get to it, of course you can make an animal. Just go ahead and make one, any animal will be fine, we’re not here to judge.

Perfect. She couldn’t see the panic I was feeling, and she was going to force me to perform for her. This is probably why to this day I look for tall, dominant women to tie me up and – wait, that’s another story.

Anyway, I made a snake.

While the rest of the class was shaping legs and ears and tails and antlers, the little bastards, I took my clay and rolled it into a thin tube about a foot long. I tapered it a little at the back end, but I doubt if I had the herpetological expertise to make a hood, the characteristic mark of the cobra, or even a mouth. So I probably didn’t. This is all a little blurry to me, as I am just recovering this memory now after all these years.

I had found a loophole. Legally, a snake was an animal. She didn’t say “mammal,” or “any animal except a snake.” She had said “…any animal will be fine.” So I had her, and I was off the hook.

Of course you know what happened. The snake didn’t fly. I remember clearly when it was my turn to show what I had made, I held it up and said “I made a snake.” Even though I knew I was in compliance with the letter of the assignment, I had a lump in my throat, because I knew the snake wasn’t going to cut it. And it didn’t.

Her smile turned into a sneer, then a small, derisive snicker escaped as she told me that a snake wasn’t good enough. Oh, she didn’t use those words, of course, but her meaning was clear enough: “You are a rotten kid. You have tried to slide by on this assignment, using a technicality. And you are not getting away with it!” In sympathy, the rest of the class laughed uproariously at me and my snake. My face burned, my vision blurred, my heart palpitated. If we could have found a hole, we would have crawled into it, me and the snake.

She forced me to make something else, and I think I made a cow, taking care to make the worst cow ever sculpted, to prove to her that I had no aptitude for this, that I was right and she was wrong, and she should never have tried to make a sculptor out of me. As soon as she saw it and half-heartedly approved, I destroyed it violently. And I never tried to make anything out of clay again.

In fact, for many years my nickname was Snake, because I always tried to slide by on technicalities, hoping some strong woman would take me in hand and – no, no. Other story. I remained The Snake until I played in a softball league with a guy named Ed who weighed about 130 pounds but whose amazing sinuous swing was good for a home run about every third time he batted. He actually wanted to be called The Snake, and by that time I was glad to shed that skin, so to speak.

I carried the trauma of that horrible first-grade play-time humiliation into adulthood, although it was effectively repressed and I seemed normal. Until one night on the living room floor at the home of some friends with young children. We were playing with some of the thousands of toys that kids seem to accumulate these days, when somebody brought out a couple of cans of Play-Doh.

And handed me a lump.

The memory of that horrible first-grade embarrassment came flooding back. The kids were making animals. Handily shaping their lumps into whatever the hell they chose. And I made the decision that I had to stand up and fight my demon, or it would torment me forever. I determined that I was going to make an animal, or die trying.

Here is what I made:

There’s a bigger version up at the top of this post, for those of you who are stunned by the artistry and want a closer look, and who missed it while you were up there the first time. I made it completely from scratch, without a picture or a model to work from. I just closed my eyes and saw elephant. Don’t tell me you didn’t know it was an elephant. That would make you no better than the kids in my first grade class, who laughed at me and my snake.

Since I made this elephant my self-esteem has been sky high, and women frequently tie me up and have their way with me. Yes, I have learned an important lesson. And that lesson is this: Play-Doh smells real good, but it tastes like shit.

9 Replies to “A Lump in My Throat”