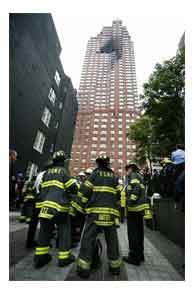 … regarding what defensive action was taken by the U.S. military on September 11, 2001 when four airliners were hijacked all at the same time. There might have been some fighters in the air over New York after one of the airliners hit the World Trade Center, but nobody got shot down, or even challenged. Nothing much happened by way of air defense after the second plane hit the second tower, either, or when the other two airliners were pretty much known to be up to no good.

And now, five years later, apparently you can still hop in a light plane, fly right into New York City and crash into a skyscraper.

So here’s my question: Exactly what has the government been doing for the past five years to “make us safer” from terrorists? I mean aside from pissing off the entire Islamic world, alienating most of our allies and allowing two members of the “axis of evil” to get atomic bombs.

I guess if I were a terrorist, I’d be loading up my Cessna with explosives and getting ready to meet the 72 virgins in Manhattan.

4 Replies to “A Question”