It’s Veteran’s Day, and I never know what to say about the veterans.

I don’t support the troops, at least not in the fetishistic way most of us seem to. I don’t wish them harm — I wish them home. Back to work, back to school, back to wives and husbands, back to the world of life, and away from the killing fields. 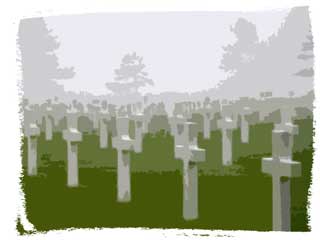 Every war, regardless of which side eventually must surrender, begets the next war, and the next. We think it’s so important that we’ll go and get maimed and leave our babies behind, and our mothers, everybody in tears, over some prime minister’s theory, some president’s anger. We go thinking we must, and believing that if we fight fiercely, kill bravely, that it will put an end to war, and make us all safe.

This, of course, is bullshit.

Every war brings us all closer to death, as we develop more and more sophisticated and devastating weapons and techniques, as we humiliate and enrage populations around the world, who then develop their own devastating weaponry and methods. The troops and the veterans? I’m not mad at them. I’m just sick of the constant strife.

Look, we’ve been thinking since the beginning of history that it makes sense to kill for peace, right? What is that, six or seven thousand years? How about if we have a moratorium on this organized mayhem? Let’s say nobody signs up for the military for a hundred years. That seems fair to me. It’s a pretty short stretch of time in the scheme of things, to see if we really need all this violence and hatred.

At the end of that time, there would be no more veterans, no more regimented marching. The daily fear that grips us of someone else’s army would fade. The military cemeteries would be deserted and silent. After decades of rebuilding, the cities of the world would be healed and thriving. Our heroes would be the teachers, the artists, the musicians, the scientists, the healers. No mother would be holding her breath, hoping her child survives the next tour of duty. After a century of diplomacy, we would be sharing the planet with our earthly neighbors instead of trying to take it away from them. Maybe we’d be looking to the stars for some elbow room.

I know what you’re thinking. Sure, it’s a stupid idea. It’s almost as stupid as going on and on, making more veterans, endlessly fighting the Very Last War.

13 Replies to “A Veteran’s Day Proposal”