Music has always thrilled me. 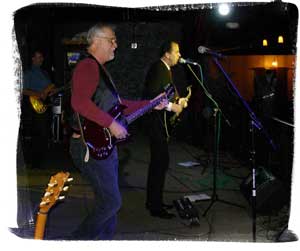 As a little kid I remember a cheesy portable record player, with a tone arm heavy as a log and a needle on the end of it as big around as a No. 2 pencil. Maybe it was the equipment that fascinated me as much as the music, because, really, all I had was a Gene Autry record, a 78, I think, Gene singing “Here Comes Santa Claus” b/w “Rudolph the Red-Nosed Reindeer.” There had to be other records, but my memory is hazy. There might have been a comedy record by a guy named Yogi Jorgensen, who pretended to be drunk. I might have had “How Much is That Doggie in the Window?” by the fabulous Patti Page. Hey, don’t blame me. I was four years old. But I enjoyed messing with that little record player, and I played those records until my parents must have wanted to scream. I shudder today when I think what the tone arm and stylus must have done to those poor old discs with every play.

You might think it was a lame time for white American music. But it was the very early 1950’s, and I know now that there was a lot of cool stuff going on. Just not at our house. Musically speaking, I guess my parents were dorks. It wasn’t their fault. I remember the music that came on the television: Burl Ives, Perry Como, Dinah Shore. I was so brainwashed that when Elvis showed up on The Ed Sullivan Show in the Fall of ’56, when I was 8 years old, I was as disgusted at his filthy gyrations as The New York Daily News, which reported that Elvis â€œgave an exhibition that was suggestive and vulgar, tinged with the kind of animalism that should be confined to dives and bordellos.â€ Hmmph.

I wanted me some of that.

I completely lost interest in Patti Page. I tried to get my father to build me an electric guitar (I don’t know why I didn’t ask him to buy me one. Maybe I thought such a strange contrivance had to be custom-made. It certainly didn’t look anything like my Uncle Ralph’s ukulele.)

That was how it started, the obsession. It would be five more years before I got my first guitar, but I was mesmerized that afternoon, and I haven’t really come out of the spell yet. Maybe I never will.

All this is in response to kStyle’s interest, and Smokin’ T’s advice, but it’s late and it’s a long story, so I’ll work on it some more and try to make my point here soon.

2 Replies to “After ‘While, Crocodile”