Sydney Pollack is dead. Dick Martin is dead. I accidentally deleted ten directories off the network today at work. It will take one full day to recover from that, plus the stress of trying to conceal that it was my fault, followed by catching up on all the work I didn’t do while I was recovering from my stupid mistake.

But my bandmates don’t get it. I don’t know what they think I’m about as a musician, but the other day it was strongly suggested that we learn and perform a song called “Kryptonite,” by a band called 3 Doors Down. I resisted as long as I could, because I smelled something fishy, but over the weekend I was forced to listen to it for the first time, and I thought it was some kind of joke: a wall of distorted guitar is thrown up at the 8th measure, and it stays up for the next three minutes, no dynamics, no letup, while a “singer” intones sophomoric lyrics, the melody ranging perhaps from “A” to “C”. It probably fades out.Â I don’t remember.Â It wouldn’t be worth the server space to post the MP3 or the lyrics to this piece. I’ll just say it isn’t merely a song that wouldn’t be right for my band. It’s a crappy song, period.

Today, after I fucked up the network, I looked up the song, and I found out it was a monster hit eight years ago, Number One on the Billboard chart, and 3 Doors Down won a million awards for the song and the album it was on, and it made them huge headlining stars and they’re rich and idolized all over the world.

I’m not used to being out of it like that, and it’s depressing me. I made my feelings about the song clear to the band, and they’ve backed off as if they’d stepped on a rattlesnake. So I’m pretty sure I’ll never actually have to play “Kryptonite,” but what turns me upside down is the thought that someone — someone I know — would suggest that song to me. Am I working with guys who have no discrimination at all?

I guess I can hope that we are in one of those generally sucky periods of music, such as the one that immediately preceded the first English Invasion in 1963, when Tommy James and the Shondells were the best we could get on the Top 40 radio, or just before the Punk/New Wave explosion in the late 1970’s, when tedious pomp rock ruled the airwaves. People that come of musical age during such awful times don’t know any better. I can’t blame them for making “Kryptonite” a hit.

Now, I’m sure, I’ve offended somebody, and I’m sorry. That seems to be what I do lately, and I’m sorry for all my sins and it’s been 40 years since my last confession. Mea maxima culpa. If you can defend “Kryptonite,” please do. If you can tell me what’s profound or memorable or clever or even fun about it, I’d like to hear.

And now a gratuitous picture of Goldie Hawn in a French maid’s uniform. Say goodnight, Dick. 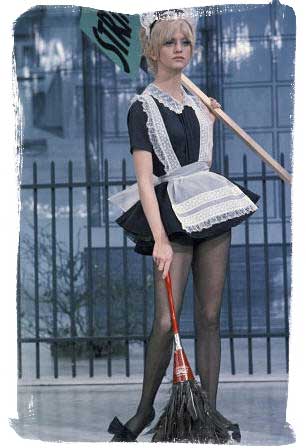