Can anybody tell me what the heck Hillary Clinton is up to? 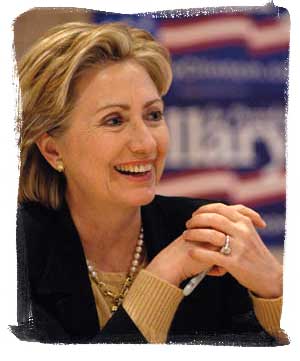 I mean, God love her, she ran a helluva campaign, and she would have been a helluva president, and the road to power is a helluva lot smoother for women now than it was a year ago at this time. But everyone in the country knows that it’s over and she didn’t win.

Everyone, that is, but Hillary Clinton.

OK, there is something to be said for perseverance against great odds. The British in World War 2, for example. They should have surrendered. They were totally outmatched, and their great cities were being bombed at will by the Germans. It was only a matter of time. But they held on — against all odds, I might add — and miraculously they were saved. Sure, it took a gigantic effort on the part of their American friends, but it happened because the Brits simply wouldn’t quit, even when it looked as if they were already defeated.

Is this what Senator Clinton thinks will happen to her? That maybe she’ll get that One Big Endorsement that will change everyone’s minds, or that Barack Obama will be caught on video swearing allegiance to Osama bin Laden? I mean, she’s not winning the popular vote, states won, the pledged delegates or the superdelegates. This whole idea that Florida and Michigan should be counted feels way too much like changing the rules after game has started. Her argument about winning in the big states is weak — New York and California, to name two, are solidly Democratic. The fact that she beat other Dems in those state primaries doesn’t mean that they’ll turn Republican in November if she’s not the nominee.

But Clinton is not stupid, and I don’t see her as delusional, so I have to ask: What the heck is she up to? What’s the point of continuing to campaign past the end? Some would say it’s the money. Her campaign is in the hole big time, largely to her, and she wants to keep the donations coming in so she can retire that debt. But I think she’s too honorable to pull a scam like that, getting people to send money for a goal she has already abandoned.

Help me out, people. I’m just trying to understand. I’m not one of those who has already decided that she will drop out of the race, and the only discussion is when she will do it and what she will negotiate for in exchange. I’m not standing by the door glancing at my watch and jingling my keys. I think she’s got something up her sleeve, and I want to know what it is.

And I want to know before she springs it, because I’m just that special kind of guy.

18 Replies to “The Hillary Paradox”