Molly the Cat was sitting motionless on the back stoop. 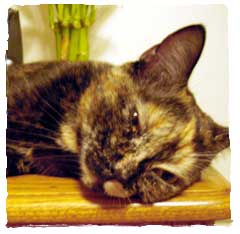 She’s the first cat I’ve ever had, having grown up more of a dog person, so she is teaching me all about cats. One of the things I’ve learned is that cats often sit motionless for long periods of time. When they are not sleeping, I think they are trying to demonstrate what they might look like stuffed. Most of the time, they’re sleeping.

But I am standing quietly behind her, in the kitchen, watching her through the screen door, when I detect a slight variation in her stance. Her body tenses slightly, her ears swivel toward a certain point in the backyard and her feet gather up under her as she slowly lowers herself into a crouch. Her back legs tense and flex a few times. I am about to learn something new, firsthand…

I know a girl, her name is Kristin. She’ll never see this, so I am using her real name. She is a beautiful child, just eighteen years old, or maybe seventeen, a fresh, vibrant new bloom. She is my niece’s best friend, has been for a decade. They are rarely apart. They might as well be sisters, for all the sleepovers they have had at each others’ homes. They have studied together, played together, caroused around Southern California together, and I have no doubt have drunk together and started to learn about boys together. Last week, just last week, they graduated from high school together. They rigged it so they could walk together in the procession, and then they partied together until dawn.

As long as I have known Kristin, she has lived alone with her mother, in an apartment, just the two of them. I talked to her mom twice. Once on the phone when I took the girls to Disneyland (naturally I had to be checked out), and once when I found an unrecognized phone number programmed into my cell phone. It was hers, and we spoke for a minute, not knowing each other. She figured out who I was first, before I could solve the puzzle, so I thought she must be pretty smart.

I missed the graduation ceremony myself, and I still had not met Kristin’s mom when I made a little photo slide show of the affair, using what was on the memory card of someone’s digital camera. One shot that I included was of the two graduates just after the ceremony, posing in their caps and gowns, holding their bouquets and flanked by their two proud mothers. Smiles of pride, joy, relief and mischief. Just a week ago.

Kristin’s mom was a waitress, so it can’t have been easy to get the kid through high school, and who knows what might come next? We sometimes think we know, but we don’t, really. Last night, coming home from work sometime after midnight, her car was struck by another, and she was killed.

She was two blocks from the apartment, making the last left turn. The other car rammed hers broadside and pushed it at least a hundred feet down the street, into a tree, where it stopped and caught fire. It must have been all over in a matter of seconds, and the other driver fled.

There are some older sisters, but they have been out of the nest for a long time. So Kristin won’t be completely alone. Just more alone than she has ever been. I try to think how I would handle this myself, at her age, and my mind just won’t look at it. We think we know, but we don’t, really.

It happens so fast I hardly believe it. Molly the Cat rockets off the back stoop, and in about a second she is at the cinderblock wall at the distant end of the yard, 60 feet away. She looks into the bougainvillea there for another second, then stands on her hind legs and bats something from a branch to the ground, floomp. There is the momentary peeping and shrieking of the baby mockingbird, and then Molly the Cat is running, bird in her mouth, into my kitchen. In those ten seconds, she has brought mindless, meaningless, inexplicable death, but she has done nothing wrong, nothing I can punish her for, and she is confused at my raised voice.

We think we know, but we don’t, really.

8 Replies to “Angel of Death”