I chopped all the meat off the Thanksgiving turkey on Saturday.

I always end up with this job, and I have to admit that once I get going on it, it’s kind of enjoyable. It 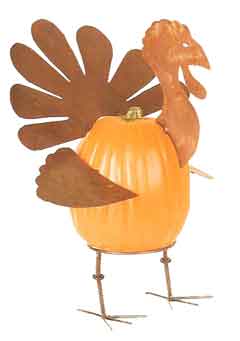 has to be done anyway: Only rarely have I seen an entire turkey consumed down to the skeleton in a single meal, and this means that the carcass has to go into the refrigerator, and each time you want a turkey sandwich you have to get it out and hack away at it for a while, then put it back.

There’s just no efficient way to store a turkey in a refrigerator, what with the odd shape of the platter and the bulges here and there, and each time you make a sandwich it gets harder to find the meat, and you are tempted to take the whole mess and chuck it into the garbage can, but you hate to waste anything in these hard economic times, so eventually the time comes when you have to strip all the edible stuff from the bones, put it in some kind of tidy airtight container and discard the fat, the skin, the gristle and the sad, sad bones.

I started out with a carving knife, which I tried to hone to a razor’s edge but which nonetheless cut sort of like a butter knife. It was good enough for the larger pieces of meat that I could see, but soon it was too big and unwieldy to be of much use. There’s a lot of meat on a turkey that is not immediately apparent to the naked eye.

Tossing the knife in the sink, I flipped the bird over and began clawing at it with my bare hands. This part of the task is the most satisfying, in a primal sort of way. For about ten minutes it was just me and the turkey, a man and his prey, as I tore off the dimpled skin, exposing pockets of flesh and adding to my tasty Tupperware stash. At first, with the knife, I salvaged some pretty good sandwich-style slabs of white meat. As I delved deeper I got a lot of turkey soup kind of stuff, or maybe turkey a la king pieces, those things that are too small and would just fall right out of a sandwich.

I ate a lot of turkey during this, but I still ended up with a good-sized pile of Just the Good Stuff. And then, in the spirit of sharing and giving thanks, both Molly the Cat and Tigger, who had watched the whole process like junkies waiting for their man, each got their own special turkey platter.