Boy, am I disheartened.

The Republicans are committing so many outrages lately that I feel like moving to a shack in the high desert, with nothing but a short-wave radio and an old guitar. Come to think of it, I might not take the radio. 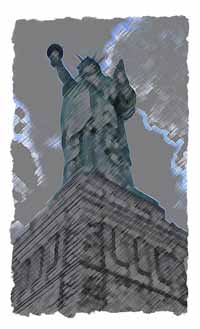 I don’t want to talk about the outrages. If you are breathing oxygen you know about them, at least in general terms. And there are so many good writers expressing their outrage so much more eloquently than I can, I won’t add to the static.

Yes, enough about the outrages. What about me?

There’s been a lot of talk lately about how this administration isn’t merely incompetent, greedy, corrupt, immoral, dishonest and drunk with power. None of these are good leadership qualities, but we as a nation have suffered through a lot of bad elected officials, and they have often got us going off in the wrong direction. It’s been painful, but somehow we seem to get past these lapses in group good judgement, correct our course, throw the bums out and get on with things. For a recent example of this take a look at President Nixon.

But I’m trying to resist joining the growing chorus of voices saying that this President, abetted by this Congress, is not just enjoying the spoils of victory, but is selling out the very ideals that the nation was founded on, turning the country into a great big ignorant international bully, codifying a doctrine of preemptive war and torture when it suits them, abrogating treaties, mocking friend and foe alike, while trampling on cherished civil rights at home and claiming all our wealth as their own.

I’m trying to resist saying those things and thinking those things because I don’t want this to be the scary end-times of our democracy, the days that history will view as the beginning of the end. I don’t know what the world would look like if The United States were to abandon its dedication to life, liberty, justice, equality and of course the pursuit of happiness.

Over two centuries the country has grown into an enormous and powerful giant and I’ve been quick to criticize the giant when it is cruel, when it is stupid, when it is unfair, when it is selfish, when it is repressive. Because the United States is simply the most powerful nation the world has ever known, and its behavior affects everyone living on the planet, and even the very planet itself, and because I grew up believing that this country was committed to using its great power to light the way to peace and freedom for the rest of the world.

I don’t know what the world will look like in fifty years, but you don’t have to look very far back in history to see that we could be headed for a new world order, one in which an armed and aggressive United States patrols and plunders the continents in a state of permanent war, dominating everyone, feared and hated by everyone; while at home we’d live in fear, not of terrorists but of our own government; and hundreds of millions of powerless worker drones would labor endlessly to enrich the high-born and well-connected few.

I’m hoping the world doesn’t look like that. I’m hoping that the American people will correct course, throw the bums out and get on with things. If we do, and if a new generation of leaders can rebuild U.S. credibility, and once the bills are finally paid for our current excesses, a kid might be able to stand up in U.S. History class without fear and ask “What the hell were they thinking?”

— from American Tune, by Paul Simon (The blue button plays the song)

3 Replies to “Distressed and Down”