Here’s the scoop on the big party. 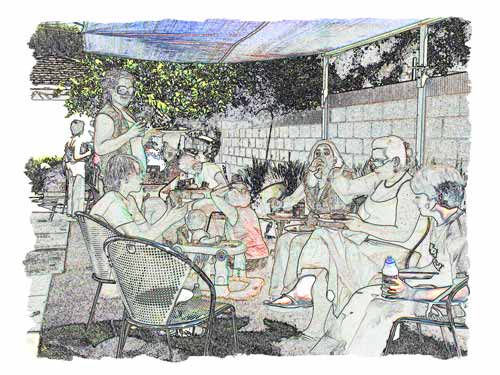 We kept revising the guest list. Not deciding who to invite, but trying to figure out out who was going to show up. It seemed that every day in the weeks leading up to the end of summer, someone would confirm, someone would drop out and someone else would ask to bring a bunch of friends. The scientist would be out of town, presumably attending a conference of scientists, but his wife might make it, if she could get a ride from their home a hundred miles up the coast. A high percentage of invitees weren’t responding at all, leaving us wondering just how much potato salad we would need. Then there was the fresh, still-bleeding marital breakup in the extended family, and it wasn’t likely that both sides of that would want to be together, but which side would blink? We didn’t know.

Trying to sort out the variables and come up with a head count, we began to wonder if we hadn’t been at it too long, if our annual “Goodbye to Summer” back yard affair hadn’t run it’s course. Mrs. Jones said “I don’t want people coming here because they think they have to.”

An unsettling thought, but it was too late to cancel. We may not know who was coming and who they’d bring, but we had to get ready for it anyway.

I made a spreadsheet. And yes, I know I’m a dork.

A column of names, and more columns to check off if they’d been invited yet, whether they had responded, if their answer was yes or no. To cover all eventualities, there were columns for the non-respondents, showing the minimum and maximum guests they represented should they decide at the last minute to make an appearance, and should they bring their cousin’s family who happened to be visiting from Minnesota. We revised the list as new data presented itself each day, and formulae at the bottom gave us totals: The absolute minimum number of guests, a total of the “possibles,” and the Big Number – What would happen if absolutely everybody decided to join us.

These numbers varied wildly, but one day the Big Number hit 87. “That’s it,” said Mrs. Jones. “We’re never doing this again.” Eighty-seven guests might seem like a small gathering to some, but it looked like a pretty big crowd to us, especially since we had no clear idea if they were really all coming, or if maybe only ten of them would. Mrs. Jones started thinking about renting portable outhouses. Eighty-seven people could seriously mess with the nest.

Other days, after receiving regrets from one or two friends, we’d be thinking that no one was coming. We put off shopping for party food and supplies until the last minute, but lots of preparations had to be done no matter how large or small the group. There was a lot of gardening, because our regular guy who mows and edges just… disappeared, about a month earlier. We kept giving him the benefit of the doubt, like maybe we didn’t get his note that he was going on vacation, but we finally decided he had abandoned his post. We replaced him, and with just one day to spare the knee-high grass was cut and we were able to wade in and clean up the hedges and flower beds.

We also strung many Christmas lights in the Cheremoya tree and around the eaves of the garage, and I dug out a string I’d bought a year ago that has 15 tiny clear lights with little bamboo shades on each one! The patio floodlights were replaced by 25-watt “party lights.” (That’s what it said on the package, so how could I go wrong?) One thing I learned from my days of playing in bars is dim the lights! The place’ll look better, and so will the customers.

We borrowed twenty chairs from the owner of an out-of-business sushi restaurant (to add to the ten we had in the garage), built a backyard bandstand for the expected musicians (can’t have them setting up equipment in the damp, uneven grass) and rigged 540.5 square feet of canopy over the yard and the bandstand, to protect our honored guests from the baking afternoon sun. I had recently bought a share of a PA system, so I put together a rockin’ playlist on my mp3 player and figured out how to play it through the system.

To make sure the jam session got off to a good start, I put together a single-purpose, one-time-only band, and we worked out a set of material. We had five or six rehearsals, and we got just tight enough to fool most people.

The menu was going to be simple: Burgers (and cheeseburgers) for most people, grilled outdoors, of course. Turkey burgers, for the non-red meat eaters and for the purists, sauteed veggies (red, yellow and green peppers and sliced zucchini and onions, in olive oil). We found a bunch of oddball snack stuff at Trader Joe’s – rice sesame sticks with and without spicy Chinese flavors in them, and a variety of crackers. The one rule we observed was NO CHIPS.

My heart has been heavy lately. I have felt helpless and adrift for a couple of months now, no longer in control, or even in the loop. I always thought, or at least hoped, that things were getting better, people were getting better, and I would some day leave a world at peace, full of people who wanted to help each other, who were not hungry and angry and reliving endlessly their childish vengeances. I guess I was wrong. Maybe all I can do is draw my friends and family to me as tightly as they will let me, feed them and sing to them, laugh with them, hold them and love them. I will kiss all the girls and some of the boys, and I will never grow so old again.

More on the party tomorrow.