Lord, take me downtown — I’m just lookin’ for some tush… 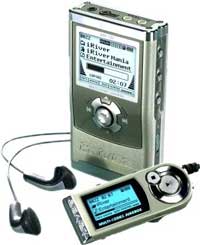 So I’ve got this MP3 player, and I ripped about 350 songs and dumped them all in there. It’s not an iPod – it’s better than that. 20 gigabyte hard drive (that’s 5,000 MP3 songs, yee-ha!), 14 hours between charges, plays like five different formats, has an FM tuner, creates MP3 files on the fly, has a built-in voice recorder (Note to self: Figure out some way to pay for this.), gen-you-wine leather case, comes with a remote control and about fifty little gizmos, adapters and attachments, hooks up to my USB2 port (is the cable included? Yes!), requires no special software – just drag and drop the music. It’s so fancy that it has a New York style belt clip: You have to unbuckle and thread your belt through it, so if anyone wants to snatch it and run they will have to take my pants off first.

I knew I was going to be doing solitary work today — stuff that must be done alone, mind-numbing stuff that I dread, so I took my player to work with me, got myself all hooked up, stuck the little buds in my ears, set the thing to play every song at random, and I was partyin’!! I was takin’ care of business, I was shakin’ it like a Polaroid picture, I was watchin’ the detectives, I was born in the U.S.A.!

The hours flew by, the work got done as if by someone else, while I rocked out in my own private stadium. And where else would you hear “The Israelites” by Desmond Dekker and the Aces back to back with The Heartbreakers’ “Room at the Top” followed by the classic Tom Waits “Filipino Box Spring Hog?” Sweeet.

Until I was 20 minutes late for the staff meeting because I couldn’t hear them paging me. I couldn’t hear anything, because I was rockin’. Someone finally came and got me, and I was busted taking the earbuds out — oh, that meeting. But in the immortal words of Keith Richard — or was it Pete Townsend? — “Fuck ’em if they can’t take a joke.”