I confess herewith to a not-so-secret lifelong love affair. 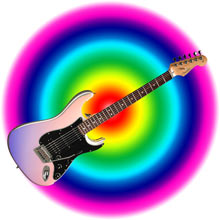 My Uncle Ralph, a truly magnificent Irish drunk, played the ukulele. If you could sing it, he could accompany you, and I made him play every chance I got. Sometimes when I was very young he would let me try to play his ukulele, but he was not a teacher and I couldn’t figure out how to make it work. He encouraged me, but he didn’t know what to say to make the instrument clear to me. In those interludes when I was holding the thing, the fun would stop, and I would get self-conscious in the deafening, expectant silence. Each time I would sheepishly hand it back to him, and the sing-along would resume.

For various reasons, the jam sessions with Uncle Ralph came to end when I was ten years old. Not long after that I went by myself to a matinee movie at the Paramount Theater in my little town in southern Minnesota. I sat alone in the dark under the starry ceiling of that old monument, and my future was revealed to me. The movie was “Rock Around the Clock.” Bill Haley and the Comets, and they weren’t playing ukuleles.

The music and the electricity was so powerful it was all I could think about for days. I even tried to build an electric guitar of my own. Actually I tried to get my dad to do it, but he wisely declined, realizing that, on the off chance that we succeeded, neither of us knew how to play it. For five years I dreamed of that movie, that sound, that excitement, and I asked my parents for a guitar at every gift-giving occasion.

When I was fifteen, I got my first guitar.

I started late, I guess, but I caught up fast, because I didn’t put the thing down for about two years. Before the first year was up I had started a band, my first of many kid bands. I learned by listening to records and copying what I heard. I had a turntable that could run as slow as 16 RPM, so I could slow down the difficult parts and work on them out of real time.

I played it until my fingers stung from pressing on the strings. After a few months my fingertips were hard and impervious to pain. I taught myself how to do most of the things I wanted to do. When I touched the instrument, put my hands on the neck and the strings, it cried, it moaned, it screamed and whispered. When you see guitar players making faces as they play, they are not putting on a show. They are feeling the music as it flows back and forth between the player and the instrument.

If you want to hear some of the playing that inspired me and made me fall in love and kept my heart a happy prisoner all these years, click on the guitar above, or just press “play” here:

A lot of what you will hear was culled from old vinyl, so don’t be judging the sound quality. Just dig the licks. These are guitar solos only, except for one vocal phrase I left in, and yes, I know it’s raw. Frankly, it was the violence that attracted me at first.

Who can name all the songs? (Hint: One of them is in there twice.)

9 Replies to “Jones In Love”