I may have mentioned my crummy job in the past.

It’s wrong for me to be so disrespectful of it. It pays my bills and keeps me out of that large group of Americans who don’t have health insurance. Without it I wouldn’t have this fine, fine computer, with which I blog. And, as noted here in the past, every Monday I am full of resolve to make the best of it, to be friendly and helpful, to keep it light, to solve problems rather than create them. 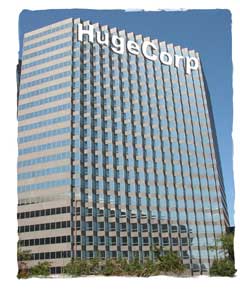 Maybe it’s the corporate ownership. My company has been absorbed by HugeCorp, a company whose only purpose is to own other companies (and extract the cash). It was created just a few years ago, so no one working at HugeCorp has been around as long as I have, or most of my immediate colleagues, for that matter. They know nothing about the actual business we’re in – that is, the part of the business that generates the revenue. So their “management” abilities are purely theoretical, and as a result the orders we get from them are arbitrary and, well, pointless. And stupid.

This has caused morale on the ground to disintegrate. Everyone’s upset because they are following orders, rather than getting the job done. You spend most of your time following orders, and then when you can fit it in, you get the job done, almost as an afterthought, and certainly not as a result of the orders from HugeCorp.

As part of the takeover, HugeCorp made it clear that it was their way or the highway. I stopped counting how many documents I have signed saying that I understand that I serve only at their pleasure and can be discarded at any time for any reason. The good news was always that I could quit if I wanted to (as if I couldn’t do that anyway). I wonder if they really think anybody swallowed that. In any case, these documents always arrived with our paychecks, as if to remind us that there was a linkage between getting paid and agreeing with everything they wanted.

The progression of my attitude has been: first, I tried to be a good employee, so I could keep my job and continue to get paid. Then, I saw how things could be improved and I moved to do so. Next I found myself having to fix problems that wouldn’t have happened if the company had brought me in to the decision-making earlier. I got a little sour about that.

After a while I made proactive suggestions to increase efficiency and streamline procedures. These were either ignored or rejected, only to be resurrected verbatim by somebody higher up the food chain and presented as their own, often to me! Around the time of the takeover I began to realize that I was not a member of the family, and would never be allowed to sit at the table. I was only greased when I squeaked really loud, and I got pretty fucking sick and tired of that. At some point I just stopped trying to help.

I have a rotten attitude. If I worked for me, I’d fire myself, except I might not be able to replace me without paying myself a lot more than I’m getting now. Also, I might sue myself for wrongful termination, if such a crime exists. The only way to get rid of me might be to kill me, which is why I have an assistant start my car each day when I leave the office.

The other day somebody’s father-in-law died. Your wife’s dad. Terrible news for your wife, no doubt, but just a bummer for you. Nonetheless, I wanted to sign the card that was circulating around the office, let the guy know I sympathized (I’ve never even met his wife). But I couldn’t catch up with the damned thing, and it ended up in the hands of someone I can’t stand to talk to, a know-nothing, do-nothing, pompous jerk who, in my opinion, only works here because he couldn’t manage the deep fryer at McDonald’s. Every time we need each other we both get angry and frustrated. My fault, as much as his.

So I didn’t sign the card, and my empathy became the victim of a toxic work environment that has got me divided from the very people I should be working most closely with – if we were trying to run a good company instead of just trying to keep our heads down and get by with the least amount of friction, so we can go home at the end of the day and start our real lives.

I wonder if this is some kind of new management-by-confusion technique that they are teaching in business school these days. So anyway, I’m a shithead. I can’t take full credit for it. In fact, I’m sure someone somewhere at headquarters is getting a promotion and a raise for it right now.

In other news, last night I ate a rotisserie-cooked chicken with my bare hands. Just tore it apart and devoured the flesh like an animal predator. Got it all over my face and shirt, and didn’t have no stinkin’ salad, neither.

18 Replies to “Jones Is A Shithead”