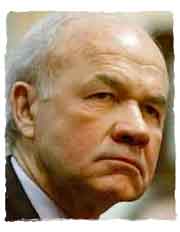 Wiped out the life savings of thousands of his own loyal employees.
Ripped off everyone who invested in his company.
Gouged millions of utility customers.
Lived like a sultan.
Built nothing.

Never took responsibility for his actions.

Try your double-talk at the pearly gates, asshole.