Another week and I still don’t feel like writing. 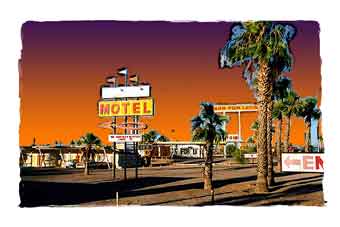 It’s been hot in Southern California. Not like that time in Yuma, when it didn’t drop below 90 degrees 24 hours a day for the whole five weeks I was there. You’d wake up at 10 AM and it would already be pushing a hundred. You could get sunburned in ten minutes while submerged in the motel pool. Not me, of course. I don’t get sunburned, thanks to my eastern European swarthiness. Fleas don’t bite me, either, maybe for the same reason. The agent said if I did good in Yuma in July, she’d see about getting me some gigs in Alaska for the winter. I did pretty good there.

I met Debbie there that summer. Just a little thing in tight jeans and a big cowboy hat, but she drove a three-quarter ton Dodge pickup. If you’re driving a pickup just for show you get a one-ton. If you want a work truck, something to haul fertilizer or tile or two-by-fours, a half-ton will do. My first day off, Debbie picked me up at ten in the morning by driving her truck into the gravel turn-around at the motel and honking for me, several times. I was already sweating when I got out to the truck and read her bumper sticker: WHEN IN DOUBT, WHUP IT OUT. She handed me a longneck as we spun out of the driveway, throwing gravel through the fence and into the pool.

I felt so cheap.

It hasn’t been that hot here, but I think it might have hit 90 degrees in Long Beach today. I took a vacation day, so I could be home instead of in my air-conditioned office. I saw the national holiday coming up on the calendar, and the weekend just ahead of it, and that pesky Monday was the only thing standing in the way of a four-day weekend for me, so I zapped it with a Vacation Request Form. We’ve got a new Head Guy where I work, and I think mine was the first VRF he’d seen. He was recruited from outside HugeCorp, so he doesn’t know about all the stupid rules and forms we have. He gave me the standard half-joking bullshit about why do you want a day off, don’t you like it here, blah, blah, blah, but I didn’t play, and he was faced with signing it on the spot or appearing to be indecisive in front of a lesser human being (me), so he signed. I should have given myself a raise while I was at it.

So my third consecutive day of freedom, I sat alone in my hot house, and got nothing done. I seem to be paralyzed. Thoughts parade through my brain, and it’s an interesting show, but I don’t seem to care enough to grab one of them and wrestle it to the ground. I felt fatigued, though I haven’t done much lately. I felt uninspired, though the ideas are almost tangibly floating around in the room. I felt helpless, though my hands are not bound.

I feel frustrated, and vaguely disgusted. If I get a handle on this (see title of post), I’ll write it here. In the mean time, thanks to you Precious Few who have continued to comment, though I have become sporadic, and more boring than ever. My heart beats sporadically for you.