I’ve tried and tried to get my brain around the “economic crisis” we are in. 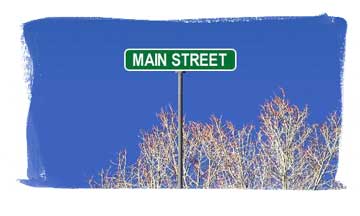 I’ve read the straight news and dipped into the financial news. Literally all network news programs on television cover it as the lead story every night. My eyes glaze over with the concepts: recapitalization, credit default swaps, toxic assets, equity stakes, mortgage-based securities. I think I have the big picture, and I can, if pressed, recite a simplified but more or less accurate description of the history, the current problem and the solutions that will now be attempted by the governments of the world.

But I didn’t really feel it until today.

Yesterday HugeCorp, the obscenely ginormous company that employs me, shut down one of their offices near mine. Ten people came in to work that morning, and went home midday without jobs. They were fired by people they didn’t know, executives from the district office, who were carrying out orders from national headquarters.

This is what it feels like on Main Street. It’s not “downsizing.” It’s going home without a job, and realizing that you have to try to find another one at a time when all the companies are firing people. It’s having to decide if you’ve got enough money to keep your health coverage, now that you have to pay the full amount out of your savings, if you have any.

The downsizing arrived today at my office. It turns out I get to keep my job, but my friend K. does not. She’s younger than me, but when I started working there she was already a fixture. Over the years at different times she did most of the jobs that we do. No one can remember a time when she wasn’t there. She was as disgusted as I was when HugeCorp took over our company despite not knowing how to run it, but she never stopped looking for ways to make things better. She always made the best of the situations we were stuck with. She became a counselor to younger employees and reference librarian to old hands. She knew our business inside and out, and if she had a “flaw” it was her insistence that her coworkers at least try to do their jobs as well as she did hers. We laughed together every day, and some days I didn’t think I could take that place if she wasn’t in the office next door.

She had been with the company for 21 years, since long before HugeCorp even existed. The HR person who fired her had not started college when K. started working there.

She wasn’t the only casualty. Tomorrow when I go to work I’ll be almost alone in my department. Those who weren’t fired got relocated, and I won’t see most of them again. I will have to face a couple of managerial types who told me today how hard they “fought for her.” It will be an emotional day, as I try to find a way to keep my own gig together, while in the office next door my old friend clears out the memories of 20 years.

K. left an hour early today, one of the very few times I’d ever seen her do that. I called her cell phone a couple of hours later and she told me she’s a big girl and she’ll be OK but she couldn’t talk right then because she was getting her nails done.

One Reply to “Main Street”