Is it the saddest day of the year?

It’s only January 4th, so maybe it’s too early to say, but today is the day that all the Christmas lights and holiday displays come down off everyone’s houses and out of their front yards. My neighbors do a fine job each year. We go for walks around the neighborhood most evenings all year round, so in December we get an eyeful of everybody’s handiwork with the decorations. 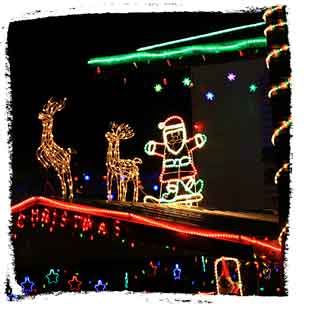 I didn’t do a scientific survey, but I think there were more displays this year than the year before. In fact, I’ve noticed a gradual decline in the exuberance of the Christmas decorating over the past five years or so, until this year. I don’t know why such a thing would happen. During The Decline, I figured it was probably because of the general malaise abroad in the land, with salaries stagnating, the environment slowly unraveling and the village idiot in the White House callously sacrificing more and more lives to assuage his ego, with nobody apparently able to stop him.

But a lot of my neighbors seem to have perked up this year. Maybe they are thinking that at least they can have their Festival of Lights, even if so much else has been taken from them, and bless them for that, as it brings me cheer during the time of the solstice. And really, what is an extra ten or fifteen bucks for electricity when your house has lost a hundred thousand dollars of value?

So the neighborhood was lit like Las Vegas for the past month with colored lights, white lights, bluish LED’s, flashing lights, inflatable Santas and snowmen, wire-frame illuminated reindeer, animated toy trains, red and white candy canes — our walks were breathtaking sightseeing tours. Most of all I was touched by whatever that need is that we seem to have, to light things and show our warmth to the world. Glad tidings!

But no self respecting homeowner can leave their lights up past this weekend, and so they were all out on New Year’s Day, and yesterday and finally today, pulling down all the strings of lights and wreaths and baubles and bringing to a close once and for all this beautiful holiday season.

I didn’t put up any lights or anything out front this year, or any year, because I can’t bear to take them down. But a few weeks ago I got a couple of strings of “icicles,” those tiny white lights that hang down from your eaves or rain gutters and try to look like the real thing. Mine are plain-Jane. They don’t flash and they’re not sequenced to music. They just shine, like hope. I put them up on the garage, facing my back yard. You can’t can see them from the street, and I’m not taking them down, ever. Their message, and mine, is “Peace on earth, and good will to everyone.”

I can hardly wait for next December.

3 Replies to “Now It’s Winter For Sure”