Sarah Palin is a dangerous woman. 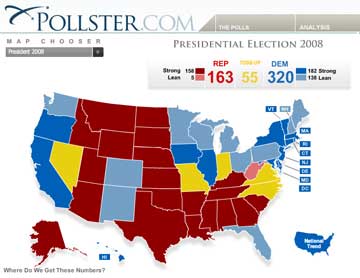 As you can see from the map (which appears today at pollster.com), she won’t be Vice President this time, because McCain won’t win.

But the wingnut Right has found their new George Bush, and you can be sure we’ll see her again. Maybe she’ll be a senator from Alaska next, which will give her a national platform and greater recognition, and then she’ll be running for President in 2016 or even 2012, maybe against Hillary Clinton.

For all I know the fundamentalists may be sincere in their screwball beliefs, but they sure don’t know anything about reality, nor do they have any interest in learning. They could never get elected on the basis of their “every-egg-is-sacred, evolution is just another theory” platform, so in order to get into a position where they can impose their thinking on the rest of us, they have made a deal with the devil, namely the demonic, scorched-earth “New American Century” gang, whom we shall call the Neocons.

Here’s the deal: The fundamentalists provide the empty vessel — know-nothing social conservatives like Reagan, Bush and now Palin, and in exchange the neocons provide the muscle (and the computer hacking) needed to win elections. The Christianists get a President (one of their own) who will appoint right-wing Supreme Court judges to reverse Roe v. Wade, oppose gay marriage, etc., and the neocons get a President who will let them make endless war on the rest of the world, while eliminating government regulation of business and robbing the Treasury of every last dime.

The Left, rightly convinced that their own programs and policies benefit the largest mass of voters, gets whipped every time, and they can never figure out what happened.

If you think this is far-fetched, I refer you to the cases of Ronald Reagan and George W. Bush, a senile old movie actor and a congenital fuckup. They spoke to the religious right directly and unabashedly, stood right up and called other countries “evil,” and claimed Jesus as their role model. Neither of them had any particular presidential skills or aptitude. Most of us on the left laughed at them pretty much the same way we are laughing now at Sarah Palin.

But it turned out that being clueless did not disqualify them from being President. The hardcore right-wing power structure, which had taken over the Republican Party, saw in them attractive candidates, dummies who’d be able to talk the Jesus talk convincingly, and who’d go along with whatever fiscal and military policies the Party handed them, because hey, who understands all that economics and diplomacy stuff anyway?

Palin is the political descendant of Reagan and Bush: attractive, zealously religious, folksy and vacant. She can be molded by campaign handlers such as Karl Rove (and Lee Atwater before him), and she can plausibly pose as presidential material, easily mouthing platitudes, slinging personal attacks and avoiding serious questions on substantive issues. Merely by virtue of who she is she can deliver the votes of the religious right, a coveted and loyal bloc.

Once in the Oval Office, like Reagan and Bush she’ll be content to let the serious ideological thinkers within the Party set policy and run the show. She’ll make good on her Supreme Court promises and other just-for-show religio-political stances, but important decisions about whether Halliburton gets all the contracts (they do) or what country needs invadin’ will be made by unelected guys behind the scenes.

There has been speculation that there was backstage neocon maneuvering to force McCain to put Palin on his ticket. I don’t know if any of that is true, but I’ve been saying for at least a year that the Republicans don’t have a chance in this election. It’s obvious to the voters who is responsible for the horrendous mess we are in, and they are ready to dish out some well-deserved punishment. Party insiders don’t really like McCain, so he was the perfect guy to sacrifice this time around. Nonetheless getting Palin on this ticket will give her the name recognition and credibility to be a believable candidate in the next election or in 2016.

We are about to emerge from eight years of Rove/Cheney/Bush darkness, and won’t it be a relief to see a little daylight for a change!Â But don’t turn your back on Sarah Palin. She’ll be back, and tougher than ever.