This is not a political blog. 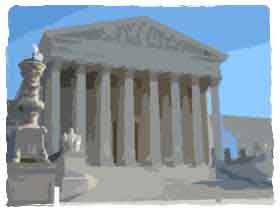 Seriously, I have written in the past about how I don’t want to focus on politics here. But I am interested in politics, and it’s hard for me to ignore certain events, when theory intersects with reality. Like today, for example.

The New Supreme Court has agreed to hear a case based on the Federal law prohibiting mid-term and late-term abortions, called by opponents “partial birth abortions.” What’s interesting about this is that the Old Supreme Court struck down an identical Nebraska law five years ago, and has since declined to hear any cases on the subject. The reason they struck down the law in the first place is that it made no exception for protecting the health of the mother, thus the government could have used it to force pregnant women and girls to risk their lives. The vote was five to four, with Sandra Day O’Conner voting in the majority. In any case, you’d think that would be that, and the Supremes would start looking around for other constitutional issues to consider.

But now John Roberts is in charge and setting the Court’s agenda, and Samuel Alito has replaced Sandra Day O’Conner. Roberts has agreed to revisit the Court’s position on a law that has been unconstitutional for the past five years, and I don’t think there’s much doubt how he and Alito will vote next year when this comes before the Court. After all, Alito is on record as saying that the landmark Roe v. Wade is bad law, and that it can be reversed by chipping away at it a little bit at a time. What a perfect opportunity for him to strike the first blow.

When Al Gore ran for President, and when John Kerry ran for President, we could have done something. We could have voted instead of staying home. Only a few popular votes would have made a difference. But in 2000 we were apparently overwhelmed by the evildoing of President Clinton, and by 2004 we were terribly frightened, so in both cases we had to elect the honorable and brave George W. Bush.

So Bush appointed these new guys, and there’s nothing we can do about them. They don’t have to pay any attention to what we want. Letter-writing and threatening to vote against them is useless, since they are not elected. Even throwing out the bums who appointed them won’t make any difference, since they have been appointed for life. They get to stay, for about thirty more years. We have to let them hear the case, deliberate, and vote on it, while we do what we seem to do best: Sit on our hands.

If Alito’s stated agenda of reversing abortion rights in this country a little bit at a time is successful, I think I’ll go into the abortion business. I’m not a doctor, but then if I were, I wouldn’t be allowed to perform abortions in our fundamentalist conservative future. I have a nice supply of coat hangers, sterilized with rum and a Bic lighter, so I think I’m qualified.

God forbid your little girl ever needs this service. If you’re wealthy, of course, you’ll always have access to safe, legal abortions overseas. If you’re not, get ready to send me your daughters.

Next: What can we do?