In the spring of 2006 we had a visiting cat at our house. 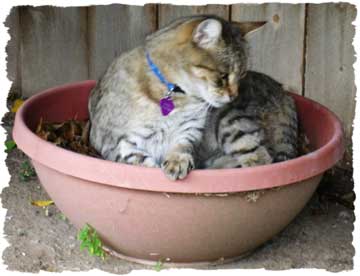 You can read what I wrote at the time, but the synopsis is this: I discovered Tigger and his brother Bootsie along with an unnamed friend frolicking in our backyard, to the disgust of Molly the Cat, the only one who actually lived here. Over a period of a couple of months, Tigger decided he liked our yard better than his own, which was only two houses down the block. The other two would go home for meals or whatever, and Tigger would be there at my back door when I closed it at night, and still there sleeping on the stoop when I looked out in the morning. He disappeared occasionally for a day or two, presumably back to where he “lived,” but he was spending more and more time in our yard.

He seemed kind of stupid and he looked frail and vulnerable. His bigger, more aggressive brother would push him out of the way and eat any food they happened to find. In fact, Tigger had a habit of filling up his mouth with any food he could find, stepping a few feet away, spitting it out and then eating it off the ground, bit by bit, leaving the bigger pile for Bootsie, since he knew Bootsie would take it anyway. I estimate he weighed less than six pounds.

We found out his name (and his brother’s) and where they lived when he accidentally got trapped inside the house while he was snooping around and the door blew shut. I caught him, read his tag and called the phone number on it. We had started to think that maybe he and Bootsie had been abandoned, and we were relieved to find that they had a home just down the street from us.

But that’s when things started to get difficult.

Willie has regular meals of high quality cat food every day now, plus, we suspect, whatever he can find in his travels around the neighborhood. His coat is glossy and he is thriving, at over thirteen pounds. We’re trying to figure out if we can stabilize his weight before he turns into a big Fat Cat.

He is gentle and curious, gradually exploring all the nooks in the house. He’s shy, but he likes to have company, so wherever you are in the house or the yard he’s likely to be nearby, licking himself.

He is endearingly stupid. He pushes on doors that open toward him, and he never seems to figure that out. He treats every meal not as an entitlement but as the gift that it is, looking quizzically from the dish to his benefactor until you say “It’s for you, Willie”

In deference to Molly, Queen of the House, he sleeps alone on a towel on the couch in the living room, which is like a different country from the bedroom or kitchen or office, where M. sleeps. M. won’t accept him, or any strangers, human or animal. We love her, but she is a cranky old lady at nine years old.

We know there is a confrontation looming with Mona. We don’t know what we’re going to do or say. Will she demand him back? Will she forgive our transgression? Will she call the cops? (Can she do that? I don’t know.) Will she and her husband move away, taking Willie with them — or leaving him behind? I have judged Mona and found her wanting, but Tigger/Willie belongs to her, and we both know it. For his part, he has clearly moved on from Mona, and he’s not looking back.

So that’s the update. I’m planning more updates in the future at revision99, okay?

Way Out Willie gave ’em all a treat

When he did that hand jive with his feet.