Because the darts wouldn’t have stopped him. 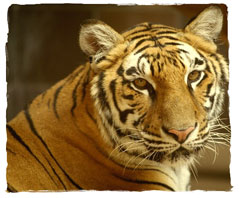 A 500-pound tiger somehow got loose last week and wandered around in Ventura County, just north of Los Angeles, for four or five days. At first there were just mysterious seven-inch wide paw prints, but this morning (Wednesday) there was a sighting. So far nobody knows who lost the tiger. There are no native tigers in Ventura County, so it is assumed this one was being kept by someone.

Anyway, authorities were called. They could have used tranquilizer darts, but said later they were “concerned for the safety of residents and motorists.” So they shot him dead.

8 Replies to “We Shoot to Kill”