On this first day of the year 2010, there is a half-heartedness in the air. 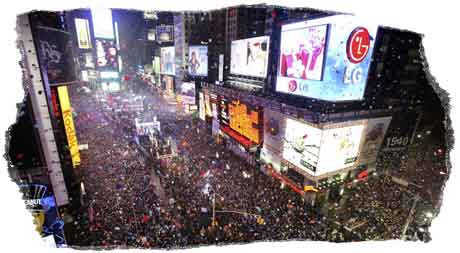 The happy-new-years are spoken without any force. I don’t know anybody who really believes it will be a happy year. I don’t look anyone in the eye and say the words. I want to, but I can’t.

I’m afraid. Afraid that our wars have morphed into The War, one big, mindless, prideful morass of murder and greed, and that it will never end. Afraid that our planet will not much longer be able to defend herself against the thoughtless onslaught of her selfish children. Afraid that our leaders have all made deals with the devil.

I watched the revelers in Times Square on television. At nine o’clock my time it was midnight there, and the people, penned into little enclosures along the sidewalks, swayed as if to dance, kissed each other ferociously and sang along with the disembodied voice of Frank Sinatra. It was all about the glittery ball and the noise and the chaos. At twenty past twelve the ball was switched off, the people were gone, the cleanup crews were starting to collect the trash that was left.

On CNN’s “celebration” coverage, Kathy Griffin was working over the earnest dullard Anderson Cooper, jabbing him relentlessly with non sequiters. She was trying to be funny, and he was trying to be eloquent, and neither were succeeding. At one point she interrupted him with “Do you have a safe word? Because you’re going to need one.”

If 2009 has been any indication, this year I think we’re all going to need one.