I heard somewhere that cats only learn to meow so they can communicate with humans.

Thanks for the advice on what to do about the cute little visiting cat in my back yard. You can find most of the story here. To recap the advice I got:

Most of you thought I should go on feeding Tigger, but deny it to his owners down the block. Certainly, when Tigger still doesn’t want to hang out at their house – where he actually lives – they will be suspicious, and surely there will be a confrontation and a questioning. Can I lie about this convincingly? I don’t know. 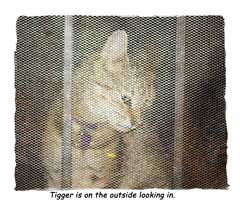 A small but significant minority felt that we should just adopt Tigger – or as some put it, accept the fact that he has already adopted us. I have to say that my heart leans in this direction. But there are two elements to my dilemna that I didn’t mention in the original post.

One is that Mrs. Jones is highly sensitive to stinky cat-pee odors, and a new cat in the family could incite a smelly turf battle. It may be true that the anticipation is worse than the actual occurrence, but she has said she would have to move out if Tigger or Molly the Cat started with the territorial marking in or about the house. I don’t know how to factor this in to our decision, because, for one thing, I don’t know if either of them would do their stinky little spraying, and if they did, how hard would it be to neutralize the smell, and would Mrs. Jones really move out? Still. Let it suffice to say that I would rather lose both cats than Mrs. Jones.

The other element is that there is a little girl involved. We don’t really know these particular neighbors, and it wasn’t until yesterday that I realized that the pudgy ten-year-old wannabe cheerleader I have seen around is their daughter. So “adopting” Tigger becomes more problematic, regardless of whether he has adopted us, or if our neighbors are glad to get rid of him, or anything else. I couldn’t take away a little girl’s kitty. Mind you, I haven’t asked her if it would be OK, but need I dramatize for you what that conversation would be like? I didn’t think so.

So for the time being I am honoring my neighbors’ wishes and not feeding Tigger. As shown in the picture above, he is still hanging out at our back door (coincidentally, it’s the kitchen door). Going on Day 5 of Tigger-betrayal, and he is learning a whole meowing vocabulary. He can now say “I thought you guys were my friends!” And “I am very hungry!” And yes, these are always exclamatory sentences.

With the various complications, together with the fact that Tigger likes us, he really likes us, I don’t think this will get resolved amicably or honestly any time soon. I may not be able to let him join our little family full-time, but if I see that he is losing weight or getting sick or just not thriving, I’ll begin “Operation Feed-and-Deny.”

I’m hoping for a sign that will tell me what to do.

6 Replies to “What About Tigger? Part 2: The Heartbreak”