I would personally like to welcome the “Reverend” Ted Haggard over to the dark side. 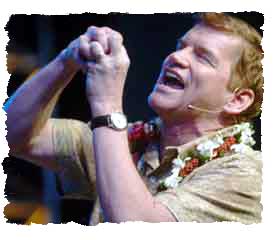 Some will suggest that covert dalliances with a gay male prostitute by a man who presumes to the leadership of 30 million evangelical Christians and who preaches that homosexuality is a sin could be nothing less than the very pinnacle of hypocrisy, arrogance and hubris. But here at revision99, the Blog of Love and Accceptance, Pastor Ted would be an honored guest, and to heck with the name-calling and the finger-pointing.

Remember when Jimmy Swaggart got caught with a hooker? Man, that was some good television, Jimmy all humble and repentant in his white three-piece suit. “Ah have sinned,” he intoned, and he actually wept. How could you not forgive the guy, no matter how much money you had sent in to the ministry? And hookers! I mean, if women are evil temptresses, hookers must be the shock troops, the painted and perfumed Special Forces. Of course they would target men of God like Brother Jimmy, and use his natural manly impulses against him and all that is holy. And then after he did penance and got absolution he went out and met up with more hookers like, within a year. You just can’t ever turn your back on hookers.

But really, we could have seen that one coming. Jimmy was, after all, cousin to legendary hellraiser Jerry Lee Lewis, who married another cousin when she was just thirteen years old. Just growing up with a guy like Jerry Lee has got to bring you into at least a passing acquaintance with Satan. So Swaggart’s fall from grace was really more like stepping off a steep curb and almost twisting your ankle. Haggard’s fall is shaping up to be much more dramatic, the stuff of tragedy.

Pastor Ted has said that he went to the gay male prostitute for a massage while he was in Denver, but he didn’t have sex with him. But then while he was being massaged, the topic of snorting meth came up, as it will do, and Ted decided “Well, why don’t I buy some meth from this man?” And so he did. But then after he had the meth, he saw that it would be wrong to ingest it, so he changed his mind and threw it away, unused. And did I mention – no sleeping with the massage guy?

Come on Ted. You don’t have to tell these lame stories. No one believes you anyway, and really, we would be so proud to have you join us and embrace our San Francisco values. If you’re gay, or even if you’re just open-minded, you’re all done with the Christian Right. They will be dropping you like a smelly gym sock. We, on the other hand, could use a man like you, with good organizational skills and leadership qualities, not to mention charisma up to here. We on the left are not so judgmental as those rigid old fundamentalists. As for your very important White House connections, I understand it would be hard to give that up, but when you think about it, after this next election, are you really going to want to be bothered with all those Monday morning conference calls?

And Ted: We’re liberals. We have better drugs.