To those who have suggested I write a song about my HugeCorp Blues: 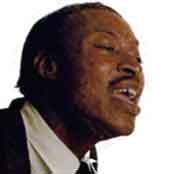 I refer you to Jimmy Reed, who recorded this Al Smith/Willie Dixon composition 46 years ago. Click the little blue button to hear the song.

Jimmy was born in Mississippi in 1925 and was working in a meat packing plant in Indiana when he started making records in the forties. When I think about working that kind of a gig, I can only smile at my own job-related angst.

The blues got Jimmy out of meat packing, and he actually became a pretty big star in the fifties and sixties. He drank too much, though, and he left this world in 1976. If this song sounds familiar to you, it may be because his music has been copied by everybody in the business for the past forty years.

I can hear you, Jimmy.

Got me working, boss man, working ’round the clock
I want me a drink of water, but you won’t let Jimmy stop
Big boss man, can’t you hear me when I call?
Well, you ain’t so big, you just tall, that’s all

Well, Iâ€˜m gonna get me a bossman, one gonna treat me right
Work hard in the day time, rest easy at night
Big boss man, canâ€˜t you hear me when I call?
Well, you ainâ€˜t so big, youâ€˜re just tall, thatâ€˜s all