I’m having my annual holiday wallow in “It’s A Wonderful Life.” 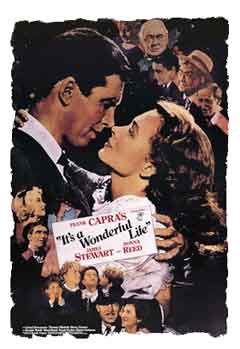 sap, and I guess this proves it. Until a few years ago, this movie was almost in the public domain, and as a result every local television station in the country had a beat up, dog-eared copy which they ran forty or fifty times every December. In a big market like LA you could catch it any time you wanted, twenty-four hours a day during the whole holiday season. I viewed most of these showings. Gradually it became a “classic,” even though it wasn’t well-regarded when it was released in 1946.

Then somehow NBC acquired exclusive rights to it, and they a.) made everybody stop showing it all the time and b.) decided to exhibit it only once (or twice) a year. As much as I loved to watch the movie, I was OK with these limitations, because by that time I knew the entire movie by heart, and I think it’s fitting for it to be treated with a little more respect. NBC got a nice, cleaned up print of it, so it looked better than ever, too. Some of those old prints were so bad you could hardly see the picture, or hear the great dialog.

But I was not always able to watch when NBC felt like showing it, so a couple of years ago I bought the DVD. Most of the time I try to seem tough-minded and skeptical, but once I year I become a quivering mass of schmaltz, as I worship at The Church of Frank Capra. That’s what I’m doing tonight, as I write. 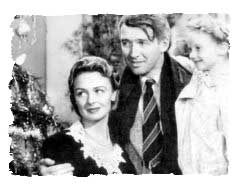 I don’t know for sure when I became aware of “It’s A Wonderful Life,” but it feels as if I have literally grown up with it. The life of George Bailey is so touching and there are so many indelible scenes in the film that I sometimes lose track if it’s a movie or a rerun of my own life. Sure it’s hokey, and I love the hokey-ness. I know it’s over the top and manipulative, but for a couple of hours each year I give up my heart, suspend my sophisticated disbelief and go along for the sweet, sweet ride.

The moment when George realizes he is in love with Mary Hatch (the fetching Donna Reed) gets my vote for Most Romantic Scene Ever Filmed, and I can’t tell you how many times I’ve sat across a table from my brother and repeated Nick the bartender’s words: “Look, mister, we serve hard drinks in here for men who want to get drunk fast, and we don’t need any characters to give the joint atmosphere.” Has there ever been a more despicable villain than Lionel Barrymore’s “warped, frustrated” Mr. Potter? And surely we could do worse than a guardian angel named Clarence.

I’m not reviewing the film here, or summarizing the story, except to say that each person’s life touches many others, and even if you do only small things the world stands to be dimished if you were never in it. I wouldn’t be missed the way George Bailey was, or welcomed back so enthusiastically, but seeing this movie makes me want to do a few good deeds.

You know. Just in case.

14 Replies to “You Are Now In Bedford Falls”