In another room, a glass shatters.

Jarred from my work, I am angry, jangled. It’s nothing, really, just a broken glass, but heat rises in me anyway. Why isn’t she more careful?

I resist the urge to go see what happened. It’s nothing, but seeing it would only make me grind my teeth. And I’d have to clean it up. 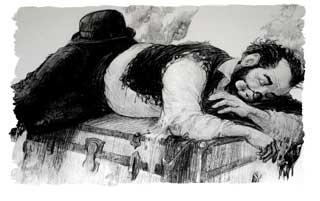 I should have run off with the circus when I was seventeen. Except I can’t do any circus tricks, and clowns give me the creeps. What’s up with the crazy makeup and the big shoes? Is that supposed to be funny?

Maybe clowns are pathetic people, so desperate for attention that they will wear big rubber noses in public and put on baggy suits in outlandish colors, just to keep all eyes on them.

But no — they must be hiding. Hiding in plain sight. They must be horribly, painfully shy, and they are hiding under the heavy makeup and oversized costumes. Why do they want to be clowns, then, doing pratfalls, tooting their little horns, cramming themselves ten at a time into impossibly tiny cars? There’s a sad, frightened little person in there, isn’t there?

I guess in a way I did run away with the circus. I ran away with a rock band. Actually, a series of rock bands. They took me first to the homes of friends, where we tried to figure out the songs we were hearing on the radio, using pawn shop guitars, all plugged in to one overloaded second-hand Standel amplifier, everybody sharing a single six-dollar Radio Shack microphone.

We graduated into backyard parties in the next town, where we played crude versions of the songs we had taught ourselves, using borrowed and rented gear. We played “Battles of the Bands” for cheesy prizes at car lots and shopping centers. Some of us disappeared along the way and newcomers who played better (or had better equipment) were recruited to replace them. At some point we found ourselves organized into groups that actually sounded OK and had real gigs at real parties and dances and nightclubs and saloons and pizza joints.

We got more sophisticated and more into it and inevitably some of us hit the road, which I guess might be a little like running away with the circus. You go to strange towns far away, and you have only the stuff you brought with you and the people you work with as touchstones to your old world. You stick out as aliens. The locals treat you bad, or they treat you good, but you can’t ignore the fact that they treat you different. Because you are different.

You live with the band, maybe not in trailers or circus tents, but when you venture into the street during the day you might as well be wearing a bright red wig and a clown suit, because everyone knows you are not one of them.

At night you stand up in front of them and do your act, and most of the time they let you do it. Sometimes they show you a little love, sharing that small part of themselves that can be shared with someone who won’t stay long, can’t be part of anything. You will be there only a short time, and the End of Your Gig waits there at the stage door that opens on the alley, smoking, patient, persistent. The End of Your Gig says there are other bars and bandstands, other sights, other women in the next town, and now that you have run away, the deal is that you have to keep on running, even if you can’t remember why you’re doing it.

8 Replies to “Running Away”