Skip to content
Right here in the Big City. 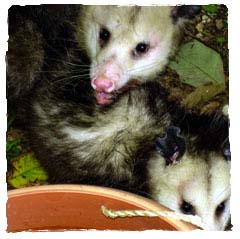 I heard a loud ka-thunk in the backyard the other morning, and I went out to investigate. Using my Holmesian powers of deduction, I pieced together what had happened:

A couple of possums (yes, I know they are really opossums, but I just can’t say it – or type it – that way) had been engaged in some hanky panky on top of a six-foot cinderblock wall. They had become transported by their amorous activities and lost their balance, slipping off the wall as one possum and crashing together into the top of a 5o-gallon plastic trash can. This caused the ka-thunk. They must have immediately rolled off onto the ground.

At this point, Ms. Possum evidently decided she’d had enough and it was time to call it a night (this was at 7:00 AM, people). She had managed to wriggle about ten feet from their original landing point. That’s where they were when I came upon them.

As you can see from the picture, the boyfriend (or BF) was not finished with her. They were not cuddling in this picture. They were coupling. About five seconds after this picture was taken, Ms. Possum (the one in the lower right portion of the frame) broke free and the two of them scrambled away into the nearby bushes. I felt bad enough for getting this compromising shot and I didn’t pursue them. For all I know they continued their debauchery in the bushes for the rest of the day.

I like possums. They are the only North American marsupial. They are quite successful. That is, their population is not threatened, because despite their slowness and what sometimes seems stupidity, they apparently have figured out how to get what they need to survive side-by-side with man. Some think they look like giant rats (the two pictured here were probably ten pounds each), but I think they are kind of cute, like an AMC Pacer. This is, of course, in the eye of the beholder. But I’m glad these little guys are in my neighborhood, and I wish them well as they start their family.

I told you I’d be getting back to writing about sex. And there’s more where that came from.

6 Replies to “Sex in the Back Yard”