I went out last week and bought a new guitar amplifier.

The last one I bought was in the 70’s. I bought it used, it was old even then, and I still have it. It’s a Fender Twin Reverb, pre-CBS blackface, a true classic. 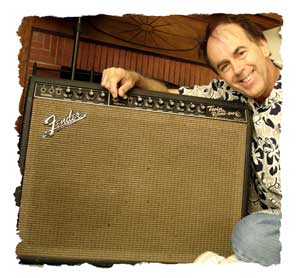 It runs on vacuum tubes – no transistors. It was built in May of 1964, in the days before printed circuit boards and integrated circuits (“chips”), at the Fender factory in Fullerton, just about ten miles from where I live now, and where I lived then.

I’ve lived in a lot of places in between, and the Twin has come with me everywhere. I put a new set of tubes in it about twenty years ago, and I had the two twelve-inch speakers reconed in 2003 (yes, they are the original Jensens). Mostly, though, I just plugged in and played, and it has never falied me. My Levi’s have worn out, I’ve blown several engines, replaced a dozen televisions and suffered through countless hard drive crashes, but the Twin just soldiers on, no matter what I throw at it, or what I throw it in.

It’s been thrown in the backs of trucks, the holds of airplanes and even into a couple of ferry boats. Mostly, though, it goes in the trunk of my car, and therein lies the problem. The damn thing weighs too much. The tube design requires a big heavy transformer, the hard wiring is done on a steel chassis, the speakers have huge magnets and heavy frames and the cabinet itself is, to put it mildly, built to last. It weighs 69 pounds, and you practically have to hold it at arm’s length to wrestle it into the trunk of my car. To some, this might not seem like such a big deal. To you I say go move your own amps. I have to move this one, and by the time I get where I’m going with it, I am out of breath, my arms hurt, my back is sore and I don’t feel like playing happy songs.

At least that’s what I told myself as part of my campaign to convince myself that I needed a new amp. I am cheap, you see, and that cheap voice in my head kept saying “You are no longer a working, traveling musician. You don’t need a lightweight amp.” To which the Little Boy Who Wanted a New Toy would respond “If I had something a little easier to move around, maybe I could get out to some gigs, restart some old relationships and make a little money – enough, perhaps, to pay for a new amp. So it would be a wash. So shut up.”

This debate went on for a couple of months. Remember, it was way back in the previous millenium that I bought my beloved Twin Reverb, so I was not about to take lightly the prospect of getting a new one. In the end, the side of me that really wanted a new amp struck a deal with the cheap side: “We’ll just go look. We won’t buy anything unless it’s really cheap, really light and sounds bitchin.”

So off we went, one of us thinking “Heh, heh, we’re just looking,” the other fondling the wad of cash in my pocket.

And we were both horrified at what we found. Talk about sticker shock. Workhorse amps like my Twin were now selling for a thousand dollars. If we wanted something affordable, there were a whole bunch of solid state amps, cold, elctronic boxes with little or no personality and complicated control panels that made no sense to me. Some of these amps actually had buttons on them that you could press to make the amp simulate an old Fender Twin Reverb. (Note: The simulation might have fooled someone who hadn’t been actually plugged into the real thing for decades, but to me it sounded exactly like, well, a simulation.) There had to be other choices.

And there were. There were “vintage” amplifiers, new amps made to look and sound old by small boutique companies, hand-wired to fifty-year-old specifications, all tube, covered in tweed Tolex and purposely “distressed” so they looked like the real thing. They had style, they were small and lightweight, and if you wanted to play edgy, chunky blues-rock, they sounded great.

And they were priced like diamonds. I played one, a perfect little gem, a five-watt amp with a 10-inch speaker, and it was $995! If you’re not sure about this, be advised that most rock bands would drown out a five-watt amplifier with the first power chord. Considering this and the fact that the engineering was done more than fifty years ago by Western Electric and Leo Fender and must be public domain by now, I’d say that $199 per watt is just a bit much. “Don’t they get it?” I thought. “Musicians are poor.” Amps from this company that were powerful enough to cut through a real band start at around $1500, and you can easily spend twice that. The cheap side of me waited in the car while I tried these babies out in the store.

In the end, even the Little Boy could not pull the trigger on that kind of money, no matter how much he wanted a new toy. Those “reissue” type amps looked great and sounded fine, but every time I thought about the price tag I found myself unable to shake the feeling that someone was trying to make a sucker out of me.

I shopped and pondered for another couple of weeks. I decided I had to have a tube amp, despite the added cost and weight, so my choices were somewhat limited, as the majority of guitar amps on the market today are solid state. But here’s the thing about solid state: A solid state amp, used correctly, will amplify an electric guitar. As long as you don’t overdrive any stage of the circuitry, it will reproduce more or less faithfully the signal you put in it, and it will do this coolly and efficiently, and without any coloration. If you step over the line, though, and give it too much level at any stage, it will freak out and distort, and transistor distortion is not a pretty thing.

But a vacuum tube is like a living thing. It gets warm when you turn it on (don’t we all?), and it responds emotionally to the signals you give it. The pickups of your guitar convert your fingering and picking and hammering and sliding and bending of the strings into electrical impulses that are a picture of these gyrations, and the tubes in your amplifier receive this information and work with it in intuitive ways. The tubes talk back to the guitar. The attacks, sustains and vibratos become a conversation between the guitar and the amplifier, and the amp becomes a part of the instrument. If you push it hard, it will distort, but smoothly and musically, thickening the sound, adding harmonics and overtones that are as unique as your playing style.

So yeah, it had to be tubes.

I was on a budget, so I had to try out amps that I might not have considered in the past: makers like Peavey and Carvin and Crate. Some of them sounded pretty good, but buying one of these would feel a little like buying a Hyundai. I rented a Sonata a few months ago, and it actually seemed like a pretty good car, but I can remember when – not too long ago – Hyundais were falling apart before you could get them home. Eventually I went back and tried one of the first amps I tested. It was more money than I had planned to spend, but not as much as the breathtaking price tags on the custom-made “retro” vintage-look units. Looking at those made me wake up and adjust my thinking to 21st century reality, which is everything costs more than you expect except DVD players, which now come free if you buy a movie on DVD.

I took my guitar and a thing I use called The Pod (another story) into a store and asked them if I could play this amp that I was considering. I messed around with it for about 45 minutes (thank you, Guitar Center!). I still had my pocketful of cash. The amp sounded way cool. Really clean on the clean side, gritty and bluesy on the dirty side, responsive and LOUD. I put all my stuff away, and asked the nice kid who was helping me if he would consider an offer that was somewaht below the asking price. I made my offer, we went back and forth for ten minutes, I got to the end of the line (actually the very edge of my budget) and the kid was saying, in effect, that he’d dig a hole and bury the amp before he’d sell it to me for that, so I thanked him politely and headed for the door. They held me up at the door for a moment, because I had a guitar with me and they had to make sure it wasn’t one of theirs, and while we were doing that the manager caught up with me and agreed to my deal, somehow twisting it around to make it seem as if it had been his plan all along. I didn’t care how he framed it. I got my amplifier. And this is what I got: 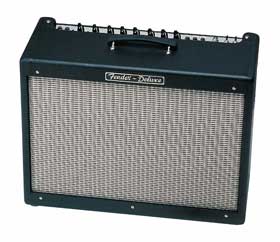 A Fender Hot Rod Deluxe. After all that shopping and thinking, I went back and got a smaller, modern version of the amp I’ve been using for much of my playing career. All tube design (so not that modern, I guess), one 12-inch speaker, half the power of the Twin, 45 pounds. I’ve only had to lift it into the trunk of my car once so far, and that was while it was still in the shipping box, but I have high hopes that I’ll be able to toss it in there at least as many times as I did the old one, without sustaining injuries, so that should give me something to do with my spare time for quite a while to come.

All I need now is a band. Call me.

14 Replies to “The Hot Rod and The Twin”