So I went through my closet a while back. 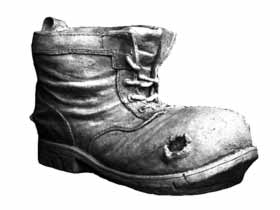 I was going to say “…cleaned out my closet” but you don’t even know all the shit that’s in there, packratted for decades, wedged on the shelves, stuffed all the way to the back, boxes stacked on boxes, unopened since the Reagan administration. Come to think of it, neither do I, and it’ll probably be a long time before I do.

But my wardrobe was getting wrinkled, ya know? I needed space, so I had to at least weed out some of the Qiana disco shirts, bell-bottom cords and heavy coats from the San Francisco days.

So after I made a little elbow room in there, what did I find but a pair of perfectly good work shoes. They weren’t new, but they were in excellent condition, in the original shoebox. They were brown, which might explain why I stopped wearing them, since I went to all black pants, all the time. I may be a dork , but I’m not about to wear brown shoes with black pants.

OK, I know what you’re thinking: Brown shoes don’t make it. But I was sick of the black pants thing. I wanted to wear black shirts, but jeez, black shirts with black pants? I’d look like Trini Lopez. Not even Johnny Cash, that old faker, but fucking Trini Lopez. If I had a fucking hammer.

So I got some tan pants. This made the black shirt acceptable, but holy shit, the black shoes, sticking out beneath tan pants! The horror!

Anyway, these brown shoes would save the day (not to mention about a hundred bucks). For some reason, back whenever it was that I squirreled them away I had stuffed them with those tight little balls of paper that you find jammed into new shoes, that you have to take out when you’re trying on shoes at the shoe store. So I took the paper out and stuffed it, one wad each, into the black shoes, then I put the black shoes in the brown shoebox and stashed them in the closet.

But I spilled coffee on the tan pants that day, and I had to go back to the black pants the next day, so I took the black shoes out of the shoebox, pulled out the paper and stuffed the wads of paper into the brown shoes, which I stored back in the shoebox. Maybe I was half asleep or having some kind of flashback. Why would anyone do such a thing?

Who knows, but for the next month or so I kept switching back and forth between the different colored pants and shoes, pulling the paper wads out of the stored shoes and stuffing them back into the shoes to be stored. I saw myself doing this as if I were watching some other nincompoop. It was an out-of-body thing, if not completely out of my mind. I said to myself “This is stupid. What are you saving these wads of paper for?”

I switched the paper wads back and forth for a week after I knew it was really aberrant behavior, but you’ll be glad to know that today I threw them away.

That’s what kind of nutcase I am. I won’t blame you for backing slowly away.

8 Replies to “What Kind of Nutcase Am I?”