Back when people used to read my blog, I could put up a short post of, say two sentences, pose a question, and get 28 comments.

I’m not complaining or anything about my status as Completely Anonymous Blogger. I think I’m probably in pretty good company, so I don’t need your damned sympathy. But because my blog emails me whenever someone does leave a comment, I am occasionally haunted by something I wrote in the past.

Has any singer, anytime, anywhere, ever owned a song the way Bobby Darin still owns â€œMack the Knifeâ€? I mean, sure, other singers can sing it, but it takes a lot of damned 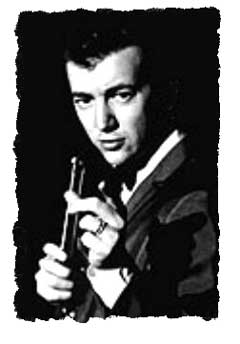 nerve, and it is always compared to his version.

It led to a good discussion of music, something I always enjoy, and over the years it has kept bringing in the comments, presumably from fans who Google *Scarlet Billows” or “Bobby Darin” and land on that post. A lot of folks had a lot of ideas about songs that may or may not be “owned” by one singer or another, and the most recent comment (by Lil Doozcoop) nails it perfectly, as did many of the earlier ones:

I have to admit, it’s hard to think of either of those two songs without hearing Patsy or Peggy, once you’ve heard those versions.

If you’re desperate for something to do, check out the original post. While you’re there you’ll be able to listen to Bobby Darin’s definitive recording of “Mack the Knife.” Do you agree or disagree with me or the commenters? Do you know of another song that has become the complete “property” of one performer?

PS: Here’s my version of the song, posted because I have a lot of damned nerve. If you have already complimented me on my singing, don’t feel you must do so again. Please step back and let someone else have a chance.

14 Replies to “Mack to the Future”